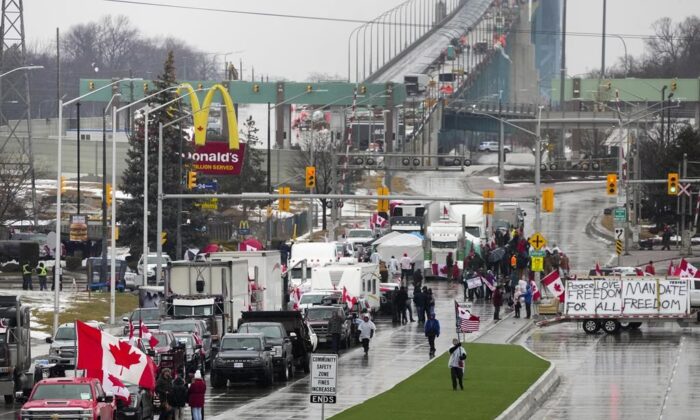 Truckers and supporters block access leading from the Ambassador Bridge, linking Detroit and Windsor, as truckers and their supporters continue demonstrating against COVID-19 vaccine mandates and restrictions, in Windsor, Ont., on Feb. 11, 2022. (The Canadian Press/Nathan Denette)
Canada

The Ontario Superior Court announced on Friday afternoon that it had granted an injunction to prevent protesters opposed to COVID−19 measures from blocking the Ambassador Bridge border crossing in Windsor, Ont.

According to Chief Justice Geoffrey Morawetz, the injunction will take effect at 7 p.m. Friday evening and give police more power to end the partial blockade.

Since Feb. 6, protesters have been demonstrating at the Ambassador Bridge crossing to voice their concerns over COVID-19 mandates and restrictions, saying the measures infringe on their freedoms.

The protests were inspired by the Freedom Convoy movement that began as a demonstration against a requirement for truck drivers to have COVID-19 vaccination for cross-border travel. The protests grew in size as people from across Canada joined in, converging in Ottawa on Jan. 29, with many saying they will stay until all COVID-19 mandates are lifted.

The City of Windsor was granted intervener status in the case, and its lawyer said the protest was impeding local residents’ enjoyment of their homes and had forced the city to relocate emergency apparatus. Different industry associations, including the Automotive Parts Manufacturers’ Association, also made submissions, saying the blockage is costing them tens of millions of dollars each day.

The Attorney General of Ontario, which also had intervener status, said that not all forms of protest are protected by the Charter of Rights and Freedoms.

A lawyer for a group of protesters argued that they were not blocking all lanes of the border crossing, so an order was not necessary.

But the deputy chief of police told the city’s lawyer that while one lane was open as a result of negotiations with the protesters, it was only to allow emergency vehicles access.