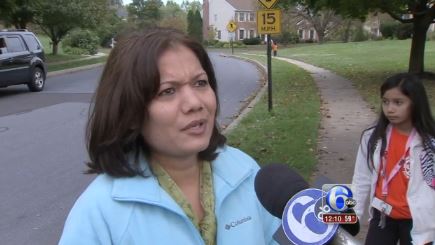 Cleris Christian, a parent of a student at Inglewood Elementary School, is in support of the school's decision not to hold Halloween events during the school day this year. (Screenshot/ABC)
US

Parents received a letter from the principal of the school explaining the decision to not hold Halloween parades or events this year.

The letter, obtained by ABC, reads in part:

“Some holidays observed in the community that are considered by many to be secular (ex. Halloween, Thanksgiving, and Valentine’s Day) are viewed by others as having religious overtones. The district must always be mindful of the sensitivity of all the members of the community with regard to holidays and celebrations of a religious, cultural or secular nature. The United States Supreme Court has ruled that school districts may not endorse, prefer, favor, promote or advance any religious beliefs….”

It’s school district policy “to not sponsor or support the celebration of Halloween parades, Halloween parties, or dressing in Halloween costumes,” according to the principal.

A district spokeswoman told ABC that the cited policy refers to classroom instruction.

“What’s left up to the principals is parties, how many parties can be held during the school year, classroom parties,” said the district’s manager for community engagement, Christine Liberaski. “But parades, district-wide events, that is a district decision.”

School-wide Halloween events can still take place before or after school hours, per the letter.

Parents told ABC that school officials are going too far.

“I think it’s a disgrace,” said parent David Braun. “I can’t even explain how infuriated I am with this. Now we’re taking out Halloween. Even with the Pledge of Allegiance, that was up for debate because we mentioned God in it. When are people just going to stop and let schools be schools?”

Other parents, though, supported the decision.

“We kept our kids home from school on that day because we didn’t participate in it,” said parent Cleris Christian. “And sometimes they would just sit in the office.”