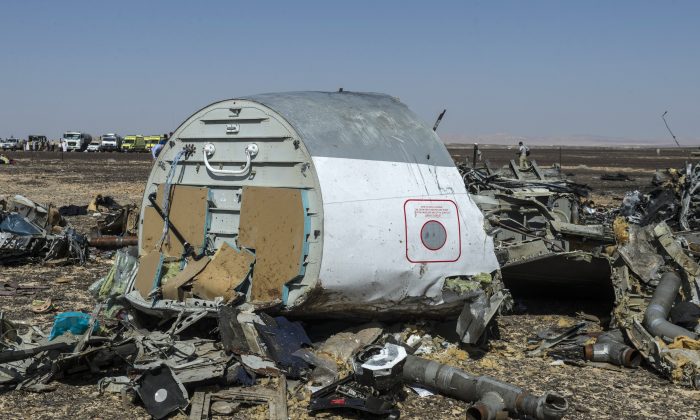 Debris of the A321 Russian airliner lie on the ground a day after the plane crashed in Wadi al-Zolomat, a mountainous area in Egypt's Sinai Peninsula, on November 1, 2015. (KHALED DESOUKI/AFP/Getty Images)
Middle East

A U.S. infrared satellite has detected a possible midair explosion on the Russian passenger plane that went down over Egypt on Saturday morning.

An American official told NBC News on Nov. 2 that the U.S. intelligence community believes the “heat flash” observed by the satellite might have been a type of explosion on the plane itself. The official theorized it may have been a bomb or a fuel tank explosion.

However, the imagery ruled out a surface-to-air missile attack, NBC reported.

“The speculation that this plane was brought down by a missile is off the table,” the official told NBC News, under the condition of anonymity. The satellite would have been able to detect a heat trail of a missile shot from the ground. Meanwhile, experts have dismissed the idea that ISIS has the capability to fire surface-to-air missiles that reach 30,000 feet, which is how high the plane was flying.

The plane was heading from a Red Sea resort on the Sinai peninsula to St. Petersburg, Russia. All 224 people on board the plane died. The Islamic State, or ISIS, claimed responsibility for the attack, but Russian officials doubted the group was behind the crash.

According to the U.S. official, “the plane disintegrated at a very high altitude,” and as the satellite indicates, “there was an explosion of some kind.”

“It’s unlikely, but I wouldn’t rule it out,” the U.S. director of national intelligence, James Clapper, said in a response to a question as to whether ISIS was involved. He made the remarks at a Defense One conference in Washington, D.C. on Monday.

“We don’t have any direct evidence of any terrorist involvement yet. ISIL had tweeted claims,” he said, using another term for the group.

Kremlin spokesman Dmitry Peskov seemingly echoed Clapper’s statement, saying no theory could be ruled out, according to Reuters.

Investigators have recovered the plane’s black boxes. Analysis of the two is expected to start on Tuesday, Egyptian officials told Al Jazeera TV.

“There is much work to be done to study the debris of the aircraft and the data of the flight recorders,” the chief of the Russian aviation agency, Aleksand Neradko, told Rossiya 24 news channel. “The debris is indeed spread over a large area indicating that the plane fell apart at a high altitude. But speculating on the cause is premature.”