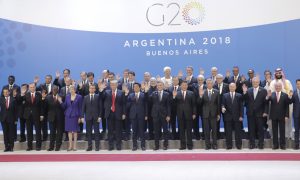 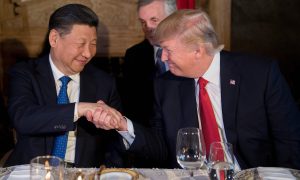 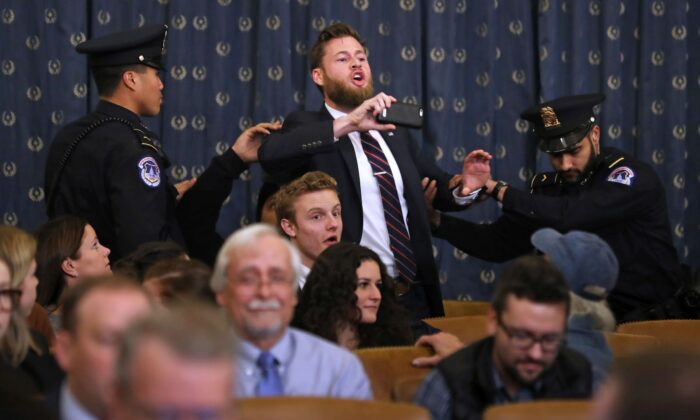 Infowars host Owen Shroyer shouts as he is removed by police after interrupting a House Judiciary Committee hearing on impeachment in the Longworth House Office Building on Capitol Hill in Washington on Dec. 9, 2019. (Chip Somodevilla/Getty Images)
Politics

The host, Owen Shroyer, accused Nadler and the Democratic Party of treason and later confirmed on Twitter that he was the one who disrupted the hearings.

“Jerry Nadler and the Democrat Party are committing treason against this country! You can kick me out, but he’s the one committing crimes. You are Jerry Nadler,” he shouted. Shroyer posted video footage of the incident.

As Nadler gaveled down, Shroyer shouted: “You’re the one committing treason. America is done with this.”

Photos from Getty Images showed Shroyer being arrested and carried away by Capitol Police.

“We voted for Donald Trump, and they’re simply removing him because they don’t like him,” he yelled, adding that Mr. Trump is “innocent.”

He continued filming while he spoke with officers outside the hearing room, telling Capitol Police he isn’t violent.

“If you want a comment, I think it’s ironic I’m the one being hauled out of here when the Democrats are the ones committing the crimes,” he told police.

Shroyer is the host of Infowars’ “The War Room.” Infowars was founded by host Alex Jones years ago.

The House Judiciary Committee held a hearing Monday to hear presentations from Republican and Democratic attorneys.

It is the first one since House Speaker Nancy Pelosi (D-Calif.) called on Nadler to start drafting articles of impeachment against Trump.

The White House is refusing to participate in the process, and ranking member Rep. Doug Collins (R-Ga.) asked to postpone the hearing, criticizing Democrats for moving too swiftly. One legal expert testified last week it would be the quickest impeachment in modern history.

Nadler, in recent television interviews, declined to say ultimately how many articles of impeachment Democrats will present but said they will involve “certainly abuse of power” and likely “obstruction of Congress.”

Trump and Ukrainian President Volodymyr Zelensky have both denied the Democrats’ allegations of quid pro quo in the president’s dealings with Ukraine.

Gilead Starts Its Own Studies of Potential Coronavirus Treatment
0