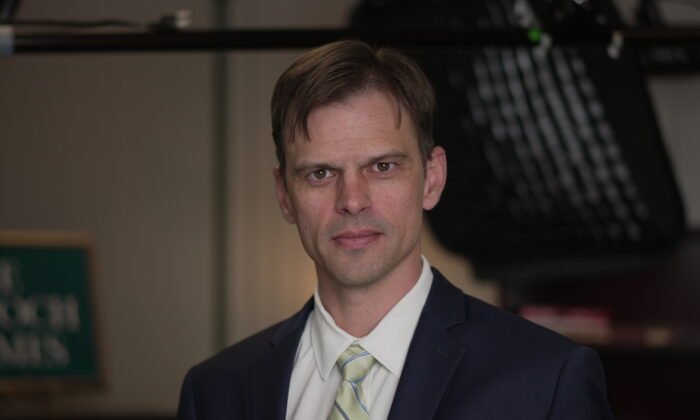 Informed Consent and Citizens’ Rights in the Age of COVID

Americans should ask themselves what their threshold is for saying ‘enough,’ says Dr. Aaron Kheriaty
By Jan Jekielek

“People need to be able to ask questions,” says Dr. Aaron Kheriaty. “That’s central to what it means to live in a free society.”

In back-to-back episodes of “American Thought Leaders,” host Jan Jekielek discussed the pandemic, informed consent, and citizens’ rights with Kheriaty, a professor of psychiatry at the University of California Irvine’s School of Medicine and director of the medical ethics program at UCI Health. For filing an August lawsuit challenging his university’s vaccine mandates on behalf of himself and others who have natural immunity, Kheriaty was suspended and the school put him on “investigatory leave.”

Jan Jekielek: Through your work in the hospitals, you actually contracted COVID. Subsequently, you got natural immunity through it. Tell me a little bit about that process.

Aaron Kheriaty: In July 2020, I did get COVID, confirmed by two independent PCR tests from two independent labs, two days apart. All the classic symptoms, except for shortness of breath.

My symptoms lasted about 48 hours. My wife and my five children also got COVID. Fortunately for the children, the illness was very mild, but it was confirmed by antibody testing.

I was confident at that point. I was in a situation in which I didn’t have to be subjected to the same worries that a lot of folks were still living with.

Mr. Jekielek: We’re 21 months into the pandemic. What do we actually know about the prevalence of natural immunity in society?

Dr. Kheriaty: One of the current failures of our public health establishment is that we don’t have a solid answer to that question.

We have some estimates from the CDC that are now many months old. I think the last estimates they published were back in May. At that time, it was well over 30 percent of Americans.

Most people estimate that probably more than half, somewhere between 50 and 60 percent of Americans, have already had COVID and recovered, and have natural immunity, including many Americans that are already vaccinated.

Mr. Jekielek: It seems this natural immunity that you’ve outlined doesn’t seem to be factored in at all.

Dr. Kheriaty: I think there are at least three reasons why the CDC has dragged its feet on the question of natural immunity.

The first reason is that if we acknowledge natural immunity, there’s a fear people are going to deliberately try to get infected with COVID rather than getting vaccinated.

The second reason has to do with efficiency. The public health establishment was very concerned that nothing got in the way of getting a needle in every arm. Any other step in the process, like getting antibody testing or giving people the option to opt out if they already had natural immunity, was seen as cumbersome.

The third reason has to do with the public health establishment’s worries about their own credibility. Many worry, I think incorrectly, that if we acknowledge natural immunity, the obvious next question is: How many people have it? So we have to do the population-based testing to see if 55 percent of Americans have natural immunity.

Many in the public health establishment will see that as an admission of policy failure, especially for the policies of 2020. Many Americans made huge sacrifices, including the loss of their businesses and income, staying locked down at home for months on end.

I think those policies were misguided. A more targeted approach would’ve been much more effective and done far less harm to people.

Mr. Jekielek: There’s this perception among a significant number of people that the risks of the vaccines are being downplayed. What are your thoughts?

Dr. Kheriaty: What are the long-term risks of the vaccine? We don’t know. Are there, for example, fertility-related risks? We don’t know. There’s certainly a lot of reported cases of menstrual irregularities.

The public health establishment is quick to reassure women there are no known risks of fertility problems with these vaccines. But the absence of evidence isn’t evidence of absence. In other words, we don’t have evidence that it’s harmful, but we don’t have proof that it’s not harmful either.

We need to be honest about telling people what we know and what we don’t know.

This is informed consent and happens all the time in medicine.

Mr. Jekielek: Is there any scenario where you might imagine coercion is necessary? I don’t mean forcing a needle into someone’s arm, but other means of coercion.

Dr. Kheriaty: I don’t think you should ever forcibly inject someone with a drug or a vaccine against their will if they are a competent adult. It’s one thing if you have a cognitively disabled person and you have another individual consenting on their behalf. We do that routinely in medicine for children or for adults who don’t have the ability to understand the risks, benefits, and alternatives to the proposed treatment.

But for a competent adult, it’s a form of assault. It’s never OK.

Now, if someone chooses not to get something and that’s putting themselves and others at undue risk, could there be an emergency situation in which those folks might be restricted from certain activities? I think that might be warranted. But those circumstances certainly don’t apply right now during the pandemic.

The threshold always seems to be receding over the horizon. Lots of Americans can sense this. We were promised two weeks to flatten the curve. Then it was basically lockdown till we get a vaccine. Then, we rolled out the vaccine, and it’s this threshold for herd immunity. That threshold keeps moving up, and people start worrying for perfectly legitimate reasons about why what counts as an emergency is always left fuzzy. These emergency powers are not being relinquished.

Mr. Jekielek: Where is this taking us as a society, in your mind?

Dr. Kheriaty: I worry that a series of novel proposals have been rolled out since the pandemic began that have asked, and, in some cases, demanded, that individuals do things which under any other circumstances they would not accept. The idea of having to show a QR code or a card verifying I have received a particular medical intervention to get on a plane or a train, go to a restaurant, or access basic goods and services would have been unthinkable two years ago.

Now we’re getting used to that notion.

It’s become commonplace for complete strangers to ask you about your vaccination status.

To me, that’s like turning to a stranger or someone who wants to sit down in the restaurant I’m running and asking them if they’ve ever had syphilis or gonorrhea. That would be entirely inappropriate and an invasion of their privacy. But this is, in principle, the kind of thing that in the last year is becoming socially acceptable.

We’re communicating the message that the unvaccinated are unclean. We’re treating perfectly healthy people as though they’re a real and imminent threat.

There are reasons to believe that the system we’ve set up is not only taking away people’s basic rights and freedoms, but in the future can be used for all kinds of other coercive mandates. And it’s not even achieving the ends for which it was put in place.

People need to be able to voice their concerns. That’s how you regain the trust of the American people. And I think people will accept an honest assessment of past shortcomings or failures. What they won’t accept is people doubling down on failed solutions as the failures become more and more apparent so that they don’t have to walk those back or second guess them. In the interest of saving face and doubling down, you will only harm your credibility even more.

I think the best way forward is to open up the possibility for meaningful conversations. People need to be able to ask questions. That’s central to what it means to live in a free society.

The common feature of totalitarianism is not men in jackboots or concentration camps—as horrifying as all those features are. What all totalitarian governments share in common is a social climate in which people are forbidden to ask certain questions.

Americans need to ask themselves: “Where is my limit in terms of the personal freedoms that have already been taken away from me and the freedoms that may be taken away in the future? Where’s my threshold for saying, ‘Enough’? This far, but no further?”

And if they decide that line has already been crossed, then I think it’s time for them to stand up and reassert their rights: their right to informed consent, to work, and to travel with reasonable safety precautions in place, but without burdens that are not benefiting anyone.

People can trust their own judgment.

They should start trusting their own judgment more.