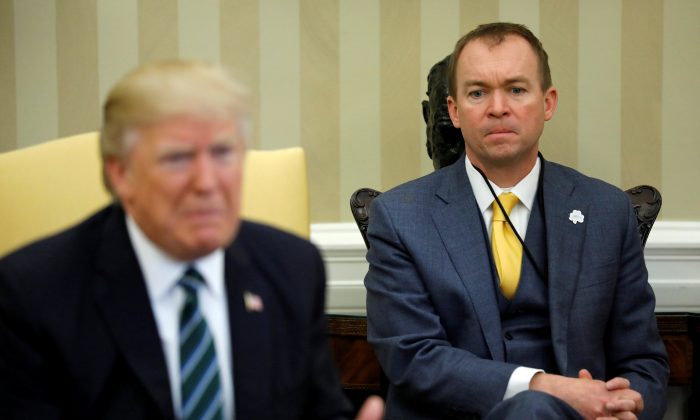 Informant ‘Very Close’ to Trump May Have Tipped FBI: Ex-Chief of Staff

Trump lawyer refutes claims of an informant, says 'I'll believe it when I see it'
By Jack Phillips

Former White House acting chief of staff Mick Mulvaney said that someone close to President Donald Trump may have tipped off the FBI before its raid Monday.

When asked by a CNN reporter Thursday about whether a person in “Trump’s orbit” tipped off the FBI and knew where documents at Mar-a-Lago were, Mulvaney said that person would have been “really close” to the former president.

“I didn’t even know there was a safe at Mar-a-Lago, and I was the chief of staff for 15 months. This would be someone who was handling things on day to day, who knew where documents were, so it would be somebody very close to the president,” he claimed.

“My guess is there is probably six or eight people who had that kind of information. I don’t know the people on the inside circle these days, so I can’t give any names of folks who come to mind, but your instinct, I think, is a good one. If you know where the safe is, and you know the documents are in 10 boxes in the basement, you’re pretty close to the president.”

No Confirmation of Informant

The Epoch Times has contacted several Trump spokespeople for comment. Neither Trump, his lawyers, nor members of his family have publicly commented on whether they believe an FBI informant tipped off the raid.

A lawyer for Trump, Christina Bobb, told Fox News on Thursday that left-wing legacy media outlets are trying to “sow division” with the former president’s camp about an informant. Bobb said that regarding an informant, “I’ll believe it when I see it.”

After serving as Trump’s chief of staff, Mulvaney was appointed to a position as special envoy to Northern Ireland after the Jan. 6, 2021, Capitol breach. Mulvaney resigned from that position on Jan. 6 and has often criticized Trump.

In early 2022, Mulvaney was hired by CBS News as a political pundit and has been increasingly critical of the former president. Mulvaney in late June told the outlet to “count me among one of the Republicans who hopes [Trump is] not the nominee at this point.”

The former president confirmed the FBI Mar-a-Lago raid on Monday evening, accusing the Biden administration and Department of Justice of being politically motivated.

Since then, the FBI and Justice Department have issued no public comments on the search until Attorney General Merrick Garland’s press conference on Thursday afternoon. The attorney general confirmed that he “personally approved” the FBI raid and said his agency is filing a motion to unseal a warrant that was used to search the former president’s property.