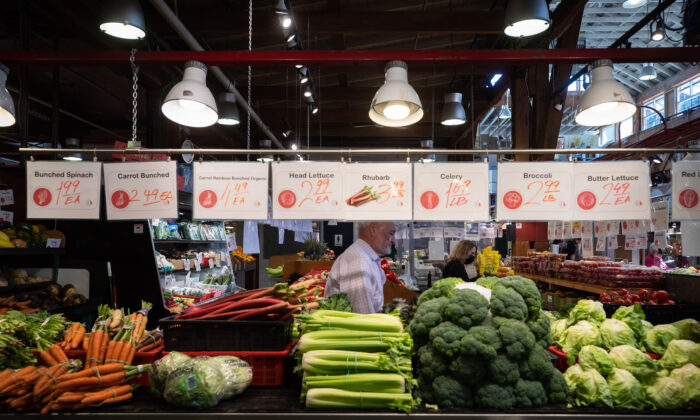 People shop for produce at the Granville Island Market in Vancouver, on July 20, 2022. Canada's inflation rate was up 8.1 percent in June compared with a year ago, its largest yearly change since January 1983. (The Canadian Press/Darryl Dyck)
Canada

Inflation is now the number one concern for Canadians, surpassing that of the COVID-19 pandemic, crime, and terrorism, according to a survey conducted by the finance department.

“The main economic issue of concern was clearly inflation and prices,” according to the report, titled “Research on the State of the Economy,” obtained by Blacklock’s Reporter.

“Participants consistently referred to rising grocery and gasoline prices and in many cases also mentioned housing and utility bills. It was noted wages have not kept up.”

“Participants expressed pessimism and concern about the Canadian economy,” the report said.

When asked to use one word to describe the state of the Canadian economy, the survey found that the words used “tended to convoy sentiments of uncertainty and pessimism,” citing examples such as ‘poor,’ ‘unstable,’ ‘volatile,’ and ‘challenging.’

“Only a few people used more positive or neutral words such as ‘okay,” the survey said.

The poll surveyed about 2,000 Canadians nationwide. The finance department paid roughly $175,000 for Environics Research to conduct the survey, according to Blacklock’s.

Looking ahead, the survey said most Canadians “were pessimistic about the coming year,” and that “they expected prices to keep rising,” while “expressed worries about the pandemic bills coming due.”

“People were unclear and confused about the causes of recent inflation,” it said. “Some pointed to pandemic-related supply chain disruptions, the sudden increase in demand for products as restrictions were lifted, rising costs for retailers due to COVID-related retrofitting and higher wages, and too much money being pumped into the economy.”

Some also suspected price gouging was going on,” the survey said. “Few participants had any specific ideas on what the federal government could do to address inflation. Some suggested cutting spending.”

When asked about the things that Canadians feel stressed about, the rising cost of living was found to be the top of mind worry for most (73 percent), followed by quality of health care (51 percent), the COVID-19 pandemic (51 percent), crime (37 percent), and terrorism (31 percent).

Just under half of the respondents (45 percent) said they worried about “the middle class falling further behind,” and questioned if Canada’s best years were behind it.

“Compared to their parents’ generation at the same age Canadians rate their generation as worse off when it comes to housing (62 percent), quality of the environment (60 percent), financial security (48 percent) and mental health (48 percent),” said the survey.