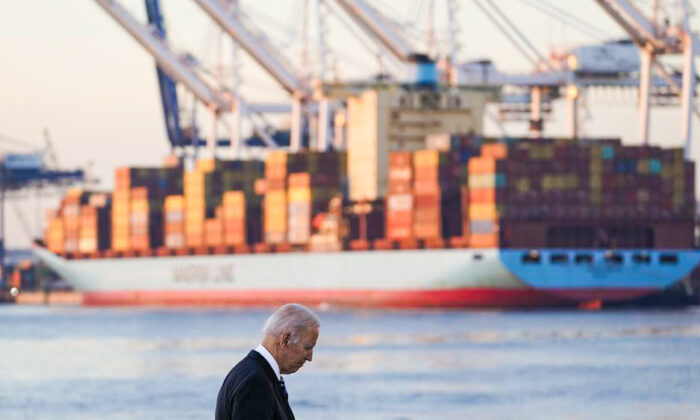 President Joe Biden departs after speaking during a visit at the Port of Baltimore, Wednesday, Nov. 10, 2021. (AP Photo/Susan Walsh)
US News

President Joe Biden spoke to the nation’s increasing rate of inflation amid global supply chain issues in an address at the Port of Baltimore on Nov. 10.

A Department of Labor report released earlier the same day showed that in the 12 months through October the consumer price index surged 6.2 percent, the largest year-on-year increase since November 1990.

Meanwhile, the ports of Los Angeles and Long Beach are continuing to sort through a container logjam and long lines of ships waiting at anchor to dock.

Biden said his administration is “set to make significant progress” in addressing these issues.

On Tuesday, the White House announced billions in near-term investments in the nation’s ports.

These include a list of grant funding opportunities, as well as $8 million for the port of Savanna, $4 billion for U.S. Army Corps of Engineers projects at ports, and $3.4 billion in upgrades for border inspection facilities meant to allow for more efficient international trade.

While the measure still awaits his signature, Biden said it will “reduce the cost of goods to consumers, and businesses, and get people back to work.”

“It’s about taking a long-term view of our economy to deliver lower costs, more jobs, and ensure our shelves are stocked with product,” Biden said.

“Inflation concerns are weighing on consumer confidence and with an annual rate of north of 6 percent, this will only continue,” Bankrate chief financial analyst Greg McBride told The Epoch Times in an emailed statement.

McBride is also predicting that supply chain bottlenecks “will be with us well into 2022 and, with that, upward pressure on prices.”

For months, Fed Chair Jerome Powell had described inflation as “transitory,” and linked it to the speed at which the country rebounds from the pandemic recession. But last week, Powell acknowledged higher prices could last well into next summer.

The increasing inflation has hit American consumers across multiple sectors, with the biggest contributor on a monthly and annual basis being fuel oil, spiking 12.3 percent over the month and 59.1 percent over the year in October.

The administration has also consistently pointed to an increase in goods being moved through the ports as a reason for the bottlenecks.

The volume of imports moved through the ports of Los Angeles and Long Beach is 18 percent higher this year than over the same period in 2018, which had been the previous record, according to the White House.

“We’ve got higher demand for goods at the same time we’re facing disruptions in the supplies that make those goods,” Biden said. “This is a recipe for delays and for higher prices.”

Biden held a meeting Nov. 9 with CEOs from leading retailers and freight movers, including Walmart, Target, FedEx, and UPS—each of which pledged in October to move to 24-7 operations.

“They assured me the shelves will be stocked in stores this holiday,” Biden said.