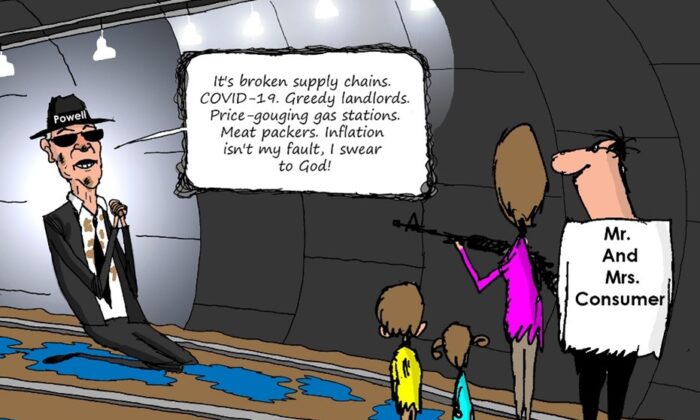 Inflation Scapegoating—Don’t Forget the REAL Cause!

Though he has—at last—recently acknowledged that high inflation isn’t quite so “transitory” after all, Federal Reserve Chairman Jerome Powell nonetheless still blames pretty much everybody but himself for the most rapid rate of producer and consumer price increases in 40 years. As I have quipped often, he has become adept at deflecting blame for these high prices HE is the proximate cause of onto any real or perceived bogey man.

“Joliet Jay” is every bit the disingenuous con man in this regard as was the iconic Joliet Jake Blues back when Carrie Fisher had the latter at gunpoint. Sure, in the present case, a number of elements have exacerbated price rises in some instances, especially as the largely self-inflicted disruptions to supply chains worldwide have led to shortages.

But make no mistake: the truism of what the late Milton Friedman said will not be changed due to simple mathematics: “Inflation is always and everywhere a monetary phenomenon.” By far and away, the overwhelmingly top reason why costs are soaring for businesses and consumers can be laid at the Fed’s own doorstep. With, recently, one-third of all the “money” in existence having been created by Jay & Co. in just the last two years, it shouldn’t take all that much to connect the dots and lay the blame where it rightfully belongs.

But we generally don’t. Helping the Fed and its fractional reserve/fiat system avoid the blame, too, we have a number of useful idiots: politicians who are economic imbeciles themselves. Recently, the likes of President Joe Biden, Senator Elizabeth Warren, and others have chided gas station owners, large meatpackers, and more as they attempt to pass on their own Fed-caused rising costs to consumers.

The president’s own recent asinine (and as it turns out, ineffective) move to sell some oil from America’s Strategic Petroleum Reserve (SPR) to push prices back down shows just how ignorant of both economics and history Sleepy Joe is. Apart from the politically desperate—and impotent—move from a man who has no idea what to do about much of anything, this was especially an example of not learning from history.

It has been belatedly acknowledged by some economic historians that at least the soaring costs for crude oil and gasoline of the 1970s were caused by then-Fed Chairman Arthur Burns. At the time, Burns’ public rationale for running a highly inflationary policy (the legacy of his “boss,” President Richard Nixon, having first forever ended what was left of the gold standard in 1971) was to actually mitigate the effects of the Arab oil embargo.

The shock to the economy, Burns claimed, could be lessened if there was enough “liquidity.” Yet all that added liquidity simply served to push up the price of oil and gasoline; and everything else. (Sound familiar?)

Burns was fortunate back then to have his own allies to divert the public’s anger. Nixon imposed wage and price controls for a while; attacking, at best, the symptoms (companies passing on rising costs) of the disease he had enabled via Burns.

Nixon/Ford economist Herbert Stein infamously suggested that America’s housewives weren’t sufficiently savvy shoppers. If only they would be more diligent to find bargains, he claimed, inflation wouldn’t have been so bad.

The most ludicrous single example of all the diversions was the idea that wearing a button would help in the fight against Fed-created inflation. Unveiled in a BIG public relations move by newly-installed President Jerry Ford in October 1974, the WIN (Whip Inflation Now) button became one of the biggest P.R. laughing stocks in history.

It also did nothing to mitigate what the Fed was simultaneously causing.

But all turned out “well” in the end for the Fed and the protection of its disastrous franchise. History now blames (incorrectly, as I have long pointed out) a hapless President Jimmy Carter for the travails—including inflation—of the latter 1970s.

As always—and to the present day—the Fed itself as the cause of all this is understood by only a precious few. And neither true progressives nor purported “hard money” advocates among elected officials dare point this out, though if they were sincere (and truly courageous) in their own policy claims they would.