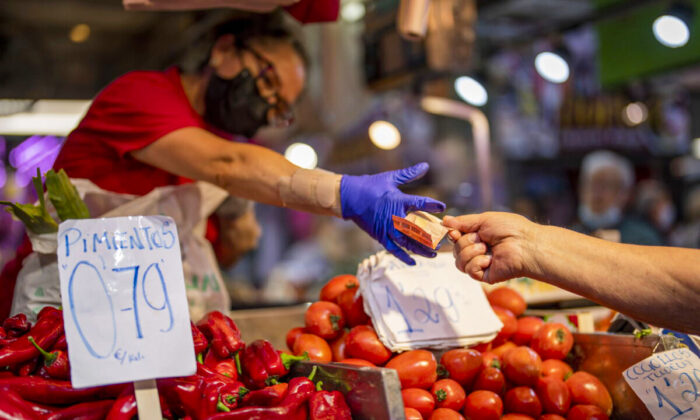 A customer pays for vegetables at the Maravillas market in Madrid, Spain, on May 12, 2022. (AP Photo/Manu Fernandez, File)
Inflation

Inflation in the 19 European nations that share the euro currency surged to a record high in June, official data shows, as pressure builds on monetary authorities to deliver the first rate hike in 11 years to cool soaring prices.

Eurostat, the E.U.’s statistical agency, said on July 1 (pdf) that the annual pace of inflation in the eurozone accelerated from 8.1 percent in May to hit an all-time high in June of 8.6 percent.

The record reading came in above Reuters forecasts of 8.1 percent and is over four times higher than the 1.9 percent pace of inflation notched a year ago in June, a rate that was in line with the European Central Bank’s (ECB) target of 2 percent.

The inflation data adds to pressure facing the ECB to follow in the Fed’s footsteps and hike interest rates at its next policy meeting in July.

“For the ECB this is another upside surprise to the inflation rate and will add pressure to act forcefully,” ING analysts said in a note.

“Hawks will push further for a 50 [basis point] hike in July on the back of this given the uncertain inflation outlook at this point,” they predicted.

The ECB’s benchmark interest rate now sits at minus 0.50 percent, with a 50 basis point hike bringing that up to zero if it comes to pass. The last time the ECB hiked rates was in 2011.

Facing multi-decade high inflation in the United States, officials at the Fed recently hiked rates by 75 basis points, putting the target rate at between 1.50 percent and 1.75 percent.

Soaring energy prices drove the bulk of the uptick in eurozone inflation, accelerating in June at a pace of 41.9 percent year-over-year and 3.3 percent month-over-month.

Core inflation, which excludes the volatile categories of food and energy, fell from 3.8 percent last month to 3.7 percent in June, largely due to weaker inflation in services.

In general, a drop in core inflation is a positive sign for the direction of the overall inflationary trend, but various domestic support packages in some EU countries make this deduction less clear-cut.

“At this point, the inflation picture is starting to muddy a bit,” ING analysts said in the note. “Domestic support packages are important drivers of diverging inflation paths at this point, think of Germany’s cheap public transport and petrol tax rebate.”

Germany’s inflation rate edged down from 8.7 percent in May to 8.2 percent in June in annual terms, while the month-over-month rate came in at minus 0.1 percent, a disinflationary reading.

A key question for investors is whether inflation in the euro area has peaked and will now start to fall.

Energy price volatility, in particular those related to disruptions to supplies from Russia due to embargos, make this a “very tough” question to answer, ING analysts said.

They noted signs of disinflationary and recessionary pressures building in the euro area, as investors increasingly brace for a potential economic contraction.

A senior ECB official said that the central bank plans to ask euro zone lenders to factor a possible recession into their business plans.

“We will propose to ask banks to recalculate their capital trajectories under a more adverse scenario, including also potentially a gas embargo or a recessionary scenario, and use this also for the purpose of vetting their distribution plans going ahead,” ECB bank supervisor Andrea Enria told European Parliament committee said on June 30.

While the ECB continues to project solid economic growth for 2022 and 2023, it has warned that an escalation in the Russia–Ukraine war could lead to a cutoff in gas supplies, dragging the eurozone into a deep recession next year.