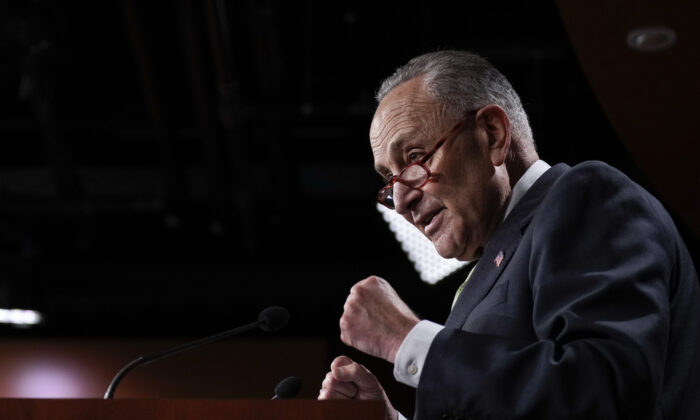 President Joe Biden and the Democrats claim that the breakthrough Inflation Reduction Act (IRA) of 2022 is a landmark bill that will fight inflation, trim the federal deficit, and support the growth-generating green economy.

But critics are questioning if the slimmed-down version of the original Build Back Better plan will achieve any of these goals, citing a growing number of studies coming out.

“[Republicans] are sounding alarms that this bill will raise taxes on American families, but it does not. Here’s the plain truth: the bill will not hike any taxes on families making under $400,000 a year,” Schumer said Monday.

However, a new analysis by the Joint Committee on Taxation (pdf) discovered that the IRA would raise taxes on nearly all income brackets, despite President Biden pledging not to increase taxes on anyone earning less than $400,000.

White House Press Secretary Karine Jean-Pierre called this analysis “incorrect” during a press briefing Monday, adding that “it is not correct because it’s incomplete.”

That said, Hodgson is concerned that these tax hikes for most income brackets will create a ripple effect for the broader economy.

“If you tax companies more, they will inevitably have less money to offer for their workers’ salaries and bonuses,” he added. “In the long run, if this passes, U.S. companies will be less attractive for investment and expansion.”

But Moody’s Analytics thinks the agreement will “nudge” the economy and inflation “in the right direction.”

The report (pdf), co-authored by chief economist Mark Zandi, conceded that the tax hikes “will weigh on economic growth,” although “the impact will be small.”

“The impact on GDP is on the margin, even a bit negative, through mid-decade, but turns meaningfully positive in the second half of the decade,” Moody’s explained.

Although some economists contend that tax hikes will reduce inflation, William McBride, an economist at the Tax Foundation, warns that it will instead “do excessive harm to the economy.” The better remedy, according to McBride, is to consider other tax reform proposals that can support growth, such as cutting tariffs, lowering marginal tax rates, and decreasing the layers of tax on corporate income.

“In a time of economic weakness and inflation, it would be better to pursue tax reforms with a proven track record for growing the economy over the long run,” he wrote.

Meanwhile, according to Levon Galstyan, a certified public accountant at Oakview Law Group, the IRA will also benefit the wealthy with taxpayer-funded subsidies.

Others disagree, calling it a balance between addressing short-term price hikes and long-term investments.

“This agreement shows the emergence of a new common sense: Public investment can reduce carbon emissions, drive economic growth, and make essential goods more affordable for Americans,” said Felicia Wong, president and CEO of the Roosevelt Institute, in a statement.

“It addresses short-term price increases, especially on prescription drugs, by using the power of federal negotiation to curb the market power of pharmaceutical companies. And it makes long-term investments in the industries of the future, especially clean energy,” Wong said.

A Deficit- and Inflation-Busting Tool?

The first widely cited study comes from the Penn Wharton Budget Model (PWBM), which estimates that the IRA will lift inflation “very slightly” until 2024 and then tumble thereafter. Modeling shows that the Personal Consumption Expenditures (PCE) price index, which is the Federal Reserve’s preferred inflation gauge, might jump 0.05 percentage points in 2024 and then slip 0.25 percentage points later in the decade.

“These point estimates are statistically indistinguishable from zero, thereby indicating low confidence that the legislation will have any impact on inflation,” the report stated.

The PWBM report also assessed how the bill would affect the budget deficit. Researchers project that it would cut cumulative deficits by $248 billion over the budget window. However, if Affordable Care Act (ACA) subsidies are extended to 10 years rather than the touted three years, the decade-long deficit reduction forecast drops to $89 billion.

In addition, the IRA would offer little benefit to the U.S. economy, the authors noted.

“We project no impact on GDP by 2031 and an increase in GDP of 0.2 percent by 2050. These estimates include the impact of debt and carbon reduction as well as capital and labor supply distortions from rising tax rates,” the PWBM report stated.

Fergus Hodgson, the director of Econ Americas, a financial and economic intelligence firm, is not confident that the bill will tackle inflation.

“Even according to its own proposed route for inflation reduction (higher taxes), the bill fails, since it actually increases spending and the federal deficit in the near term,” he told The Epoch Times.

Matthew Dickerson, the director for the Grover M. Hermann Center for the Federal Budget at The Heritage Foundation, thinks the proposal would push prices higher for families and exacerbate today’s stagflation environment—i.e., an economy with high inflation and stagnating growth.

“Unfortunately, the Inflation Reduction Act doubles down on the same irresponsible fiscal policy that has caused inflation: All of the new government spending is up front, while the deficit-reducing revenues are backloaded,” Dickerson stated.

But the Committee for a Responsible Federal Budget (CRFB) suggests the IRA is “a welcomed improvement from the status quo,” writing that it would represent the largest deficit reduction bill in more than a decade.

“We estimate the proposal would generate some deficit reduction up front and substantial savings over time,” the nonprofit fiscal organization wrote. “With interest, the proposal could save close to $100 billion per year by 2032. Even assuming the permanent unpaid-for extension of ACA subsidies (which we would strongly oppose), the plan would likely save over $50 billion per year by 2032.”

Democrats will now seek to obtain the support of their politically moderate colleague, Sen. Kyrsten Sinema (D-Ariz.), who is still reviewing the legislation.