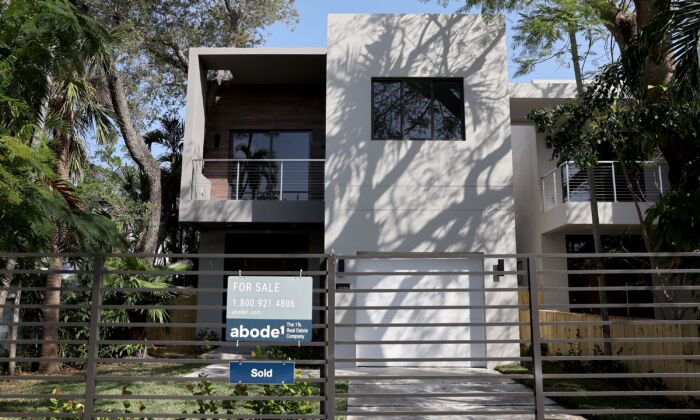 A home that Zillow shows was sold for over $2 million in the Coconut Grove neighborhood of Miami on Feb. 18, 2022. (Joe Raedle/Getty Images)
US Real Estate

The rate of home price inflation in the United States is expected to decline to about 10 percent by the end of 2022 and slow even further over the next two years, as high housing prices and increased mortgage rates push out prospective buyers, according to a Reuters poll on May 31.

Existing home sales declined to a near two-year low of 5.61 million units in April 2022 and are predicted to fall further to 5.34 million units by the second quarter of 2023.

Reuters polled 20 property analysts from May 10–30, 2022. Their answers revealed that home prices are expected to rise about 10.3 percent on average in 2022 based on the Case/Shiller index, which is half the current rate of about 20 percent.

The rise in home prices for the first half of 2022 was the fastest on record since the poll was first taken in 2001.

Average U.S. home prices had soared by over one-third since the start of pandemic in 2020, encouraged by near-zero borrowing rates, as millions of Americans decided to purchase second homes or relocate during the economic disruptions caused by the CCP (Chinese Communist Party) virus, commonly known as the novel coronavirus.

Recent actions by the Federal Reserve, along with a housing shortage, had already caused the property boom to peter out by the beginning of the second quarter.

The Fed has raised its key interest rate by a cumulative 75 basis points since March, with several more expected hikes later this year.

The 30-year fixed mortgage rate had risen to above 5 percent in April, its highest level in more than a decade, which has hurt first-time and younger homebuyers.

The May poll of property analysts predicted that increases to home prices would slow further to 4.4 percent in 2023 and 3.9 percent in 2024, down from the 5 percent and 4.1 percent predicted in the March poll.

Only a few of the analysts predicted that affordability for first-time homebuyers would improve in 2023 or 2024.

According to a separate Reuters poll, the predicted increase in this year’s home prices outpaced inflation and wage growth forecasts, which means that housing affordability is unlikely to improve in the near future, especially for new homebuyers.

According to Realtor.com, the number of active listings—which include all available homes on the market—rose 9 percent during the week ending May 21, compared with the same time last year, the biggest jump since March 2019.

The number of new home listings rose by 6 percent, compared with the same week in 2021.

Market inventory began to even out in early May for the first time since June 2019, continuing through the third week of the month with a jump in housing stocks.

The rising number of home sellers suggests that more inventory increases may be ahead, but any growth in sales will continue to be handicapped by the 16.6 percent rise in the median listing price since last year.

According to Realtor.com, “consumers widely believe that cost increases will continue, as mortgage rates are expected to continue to rise, giving a strong reason to make a purchase sooner rather than later for those who want to buy within a somewhat near-term timeframe,” even with buyer confidence at an all-time low.

The report concluded by saying that despite higher costs, it is still hopeful that the boost in inventory will push the market in a more buyer-friendly direction, with nearly three in four home sellers in 2022 saying they are planning to buy a home, which is a possible good sign for both sellers and buyers.