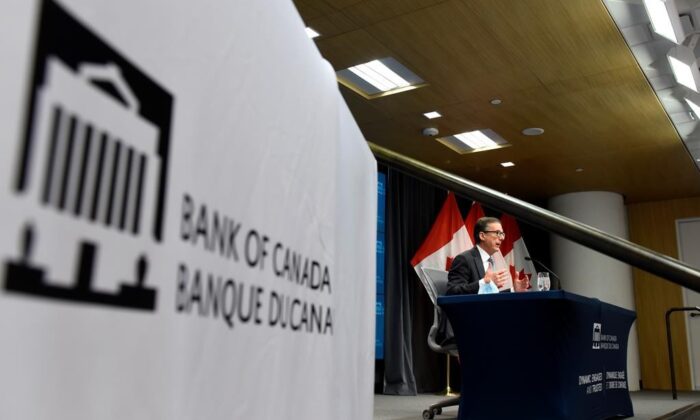 Bank of Canada Governor Tiff Macklem participates in a media availability at the bank in Ottawa on Dec. 15, 2021. (Justin Tang/The Canadian Press)
Canada

The high inflation bout affecting Canadians is neither transitory nor mostly tied to a global phenomenon, but instead the product of domestic monetary and fiscal policies, two economics experts told the House finance committee on March 21.

“Inflation is indeed a global problem, but our inflation problem is very much made at home here in Canada,” testified Vivek Dehejia, associate professor of economics and philosophy at Carleton University.

Dehejia said the roots of the problem go back to the financial crisis of 2008 and the “unconventional policies” that followed, namely quantitative easing (QE). QE is the practice of central banks purchasing bonds from financial institutions to increase the money supply and to favour investment and lending.

“So just in layman’s terms, central banks made credit available almost for free and flooded the financial system with cash.”

This has led to a bloating of the financial sectors with “huge asset price inflation bordering on bubble territory,” said Dehejia, who linked this asset price increase to the housing affordability crisis.

“Money is growing like crazy. That’s going to distort the economy and make housing unaffordable.”

With the U.S. subprime mortgage crisis in 2007 kickstarting the global financial crisis, Dehejia is seeing a repeat pattern with the current activity.

“The real paradox … is that it was a housing market bubble, the U.S. subprime mortgage crisis, that caused the financial crisis. And then our response to it, paradoxically, is again recreating the problem that we tried to fix,” she said.

‘Printing Too Much Money’

Regarding the consumer price index, which reached 5.7 percent year-over-year in February for the largest gain since 1991, Dehejia said it is “quite simply a response to the explosive growth from the Bank of Canada’s money supply.”

The war in Ukraine, the price of oil, and pandemic-disrupted supply chains may account for 1 percent of the current 5.7 percent CPI, she said.

“When the money supply is growing at 14 percent, 20 percent, it is basically a monetary phenomenon. We’re just printing too much money. So I’d say no, [inflation is] not transitory.”

“Many advanced economies have inflation rates similar to ours, not because it’s inevitable, but because they did similar things in reacting to the pandemic. Choices about monetary policy and fiscal policy got us here,” he said.

“It’s in double digits in some countries, Argentina and Turkey, for example. It’s above 1,000 percent in Venezuela, it’s about 2 percent in Switzerland, and it’s less than 1 percent in Japan. So inflation is high where monetary policy has been inflationary and low where it has not been.”

Liberal MPs on the committee pushed back against the testimonies of Dehejia and Robson, seeking to blame the inflation problem on global supply chain issues or to defend the pandemic spending as being necessary to keep Canadians afloat during lockdowns and to facilitate the economic recovery.

“I would argue that global inflation has been largely caused by the supply chain and global issues,” said Francesco Sorbara, mentioning used vehicle prices and semiconductor chips.

Sorbara, who prefaced his intervention by detailing his longstanding involvement in financial markets before becoming an MP, said the country needed a “bazooka-type response to the pandemic” to deal with sectors of the economy being shut down.

Robson agreed that under the circumstances, the government’s measures were “broadly appropriate,” but warned that continuing to “run a monetary policy and fiscal policy that presumes that the economy can grow a lot faster in a sustained way, then you’ll end up with inflation, because you’ve got too much money chasing too few goods and services.”

Robson estimates the Bank of Canada’s overnight rate should be 3 or 4 percent to rein in inflation.

“That’s not as high as it got during the last disinflationary episode, but it’s quite a bit higher than what people are ready for. And it’s certainly higher than what the government is expecting, and its fiscal plans, and the cost of servicing its own debt,” he said.

The Bank of Canada raised its rate by a quarter percentage point to 0.5 on March 2, with the next announcement scheduled for April 13.

In the United States, which is also affected by rampant inflation due to similar monetary and fiscal policies, the Federal Reserve on March 16 also raised its rate by a quarter-point, from near zero to reach a target of 0.25 to 0.5 percent.

The CPI in the United States reached 7.9 percent in February, the largest increase since the period ending in January 1982, which is markedly higher than in Canada.

But the CPI is not calculated in the same way in every country. For example, the U.S. CPI includes used vehicles and Canada’s does not, and that sector is marking a 41.2 percent increase.

The U.S. Bureau of Labor and Statistics also calculated its CPI after removing the volatile categories of food and energy, and indicated that the CPI still rose 6.4 percent, which is still the largest increase since the period ending in August 1982.