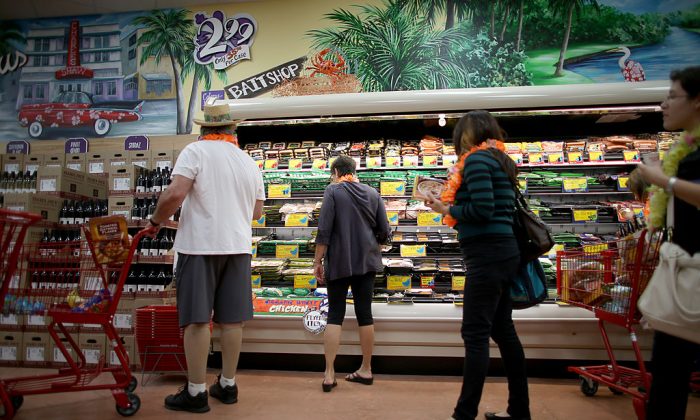 Inflation Making It Harder for Many Floridians to Afford Basic Necessities

High inflation is impacting the ability of Floridians to afford basic necessities, with a new survey from the University of South Florida (USF) showing that nearly half of Florida residents reported that surging prices have hurt their ability to pay essential bills.

The survey, based on a representative sample of 600 Floridians, sought to gauge public opinion on the impact of inflation and related policy issues, including how high prices are impacting essential and discretionary spending and what people think about the federal efforts to tame inflationary pressures.

Nearly half (48 percent) of Floridians said they either “strongly” or “somewhat” agree that inflation was hurting their ability to afford basic necessities, while 77 percent said high prices had impacted their grocery spending.

Inflation, which has been on the rise in the United States since early 2021 and hit a 41-year high of 8.5 percent in annual terms in March, has had a major impact on discretionary spending among Floridians, the survey shows.

Four out of five Floridians said that elevated price pressures had impacted their non-essential spending, while two-thirds said inflation had an impact on their travel plans.

Floridians on the whole expressed a strong sense of dissatisfaction with the federal government’s handling of inflation, with 77 percent saying they were “somewhat” or “very” dissatisfied with how the Biden administration was coping with surging prices.

While supply chain dislocations was the most common factor (87 percent) indicated by Floridians as being “very” or “somewhat” to blame for inflation, 73 percent said it was increased federal spending that drove up demand.

The inflationary surge has sparked debate as to the persistence of inflation, whether it would be concentrated in fewer sectors of the economy or be broad-based, as well as its causes.

Supply chain dislocations are “more of a symptom than a cause” of the current inflationary wave, according to former Federal Reserve Bank of Richmond President Jeffrey Lacker, with the key factor driving up prices being massive government spending on pandemic emergency programs that caused demand to balloon against a backdrop of squeezed supply.

“Simple sayings are often misleading, but in this case, the old adage ‘Too much money chasing too few goods’ is right on target,” Lacker told VCU News in a recent interview.

The economic fallout from the pandemic, including lockdowns and an initial collapse in consumer sentiment and spending, led Congress to pass massive stimulus bills that drove up demand beyond what the economy was able to satisfy, Lacker said.

“The combination of ramped-up spending and inelastic supply has driven up prices for a range of goods and services,” he said, adding that while supply-side snarls were a factor, they were not the key cause.

“The resulting bottlenecks have hindered the ability to satisfy the surge in demand. But those bottlenecks aren’t the main driver of inflation—in some sense, they are more of a symptom than a cause,” he said.

“The main driver of the surge in inflation was the stimulus programs enacted by Congress and the administration.”

It’s a sentiment that was echoed by Jason Furman, who served as chair of the Council of Economic Advisers under President Barack Obama and called increased demand “by far the most important factor” in driving up prices.

Furman wrote in a recent op-ed that discretionary fiscal stimulus totaled around $2 trillion in 2021 and that the current bout of inflation “is driven by strong demand—not kinks in supply chains—and will likely persist.”

“To be sure, inflationary pressures reflect both supply and demand factors, the exact combination of which is unknowable,” Furman wrote. “But when considering the economy as a whole, it is implausible that all the individual supply stories would add up to the generalized inflation we have seen. It is far more likely that the increase in demand exceeds what the economy can produce, leading to higher prices.”

Furman’s view of greater persistence in the current inflationary trend finds support in a recent analysis by the New York Federal Reserve. Analysts at the New York Fed said that in the initial phase of current run up in prices, it was transitory shocks and outliers that were to blame.

Price increases were initially widely considered to be “transitory” and tied to developments in specific sectors and shifts in consumption patters, they said.

Over time that view has shifted, however, “and now inflation is acknowledged to be a broad-based phenomenon,” the Fed analysts wrote, noting that a “common persistent component” now predominates in the inflationary trend.

“Sometime in the fall of 2021, inflation dynamics became dominated by the trend component, which is persistent and largely common across sectors,” they said.