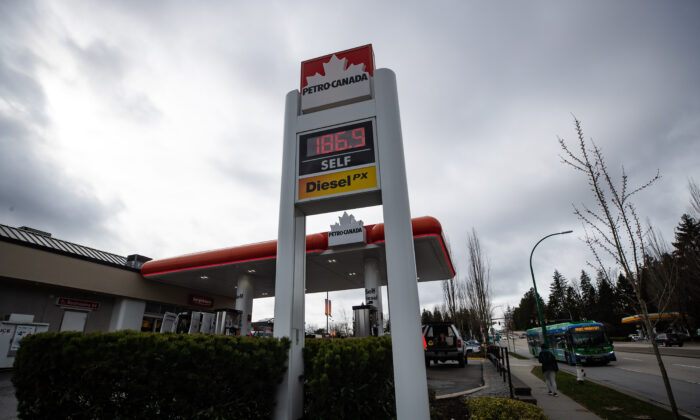 A sign displays $1.87 as the price of a litre of regular grade gasoline at a Petro-Canada gas station, in Burnaby, B.C., on March 2, 2022. (Darryl Dyck/The Canadian Press)
Canada

Amid Inflation, 6 in 10 Canadians Worry About Not Having Enough Money to Feed Their Families: Poll

Soaring inflation is adding to the concerns of younger Canadians and families with children keeping their households fed, a new Ipsos poll says.

The poll, conducted between March 11 and 16 for Global News, shows that six out of 10 Canadians are worried about not having enough money to feed their families—a figure that saw a 16 percent increase compared to an earlier Ipsos survey conducted in November 2021, when Canada’s annual inflation rate was at 4.7 percent.

With that figure climbing a full percentage point to 5.7 percent in February, according to data from Statistics Canada, and the easing of COVID-19 pandemic restrictions, Canadians’ top-of-mind concerns have gone through a “dramatic transformation,” says Darrell Bricker, CEO of Ipsos Public Affairs.

“What we’re now seeing is an agenda that’s very much dominated by really urgent economic issues, principally the cost of living,” he told Global News.

Canadians with children are the most likely to be concerned about putting food on the table, with 68 percent of parents saying they have such troubles.

Over 60 percent of the respondents aged 18 to 54 said they were worried about feeding their families, while the number drops for those in the older age group.

Younger Canadians who are starting a family and feeling the pressure of the skyrocketing housing prices are likely to find the rising cost of living irritating, Bricker says.

“It’s people who are really stretched: younger people, people who are less affluent, people with kids at home. That’s who’s really struggling here,” he said, adding that governments should heed these troubling sentiments.

“That frustration is going to find a way to boil up so that it creates a difficult political environment for any government that’s running for election,” he said.

Other than food, 85 percent of Canadians also find inflation has made “everyday things” less affordable, an increase of seven percent from November’s poll. More than two-thirds of the respondents said they’re worried about not being able to pay for gasoline.

The poll finds that anxiety is unevenly spread across the country, with 71 percent of respondents from Saskatchewan and Manitoba, and 69 percent from Atlantic Canada, saying they are concerned about keeping their families fed. Fewer people feel this way on the West Coast, with just over half (51 percent) of British Columbians saying they were not very or not at all concerned about the inflation on their livelihoods.

While 11 percent of the respondents say they can “easily” handle the increased costs, close to a quarter (24 percent) Canadians say they can’t pay more for their necessities—a figure that remains unchanged since last November.

Bricker also noted that as the Russia-Ukraine war drags on, Canadians’ initial response of calling for immediate relief and support for Ukraine would wane as the fallout impacts Canada’s domestic economy.

“What we’re going to see is people’s focus is going to get closer to home and less on what’s going on in places like Ukraine. That tends to be the pattern,” he says.