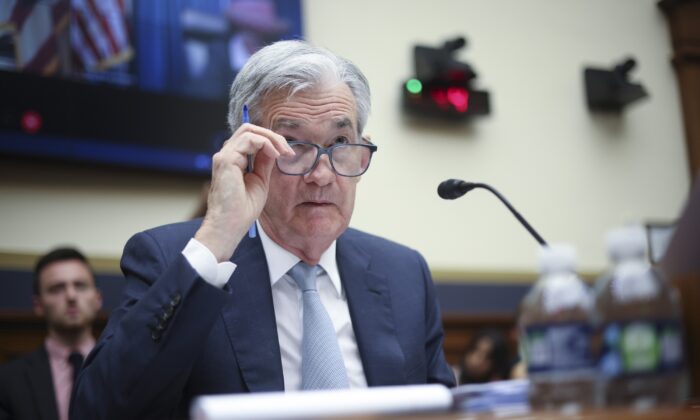 Jerome Powell, Chairman of the Board of Governors of the Federal Reserve System, testifies before the House Committee on Financial Services in Washington on June 23, 2022. (Win McNamee/Getty Images)
Business Columnists

Inflation Is Here to Stay

Fed watching used to be a fun statistical pastime. Now it’s like watching dystopian science fiction, or a scene from a “Monty Python” movie.

I’m thinking of that moment in the British comedy troupe’s “Holy Grail,” where the man who’s getting each of his limbs cut off in a sword fight protests, “It’s just a flesh wound.”

This has generally been the Fed’s reaction to the raging inflation of this past year. It seems to have utterly mystified these guardians of the value of money as to why this is happening.

The Fed seems to have woken up to its mistakes and is now acting. But it’s too little, too late. Its credibility as an inflation-fighting machine is toast.

Economists Steve Hanke and John Greenwood of Johns Hopkins University have unearthed an astonishing quotation from Fed Chairman Jerome Powell, dating from 2021. He told a congressional hearing that “M2 … does not really have important implications. It is something we have to unlearn, I guess.”

Oh really! This statement should live in infamy.

This seems to confirm my own theory that the Fed—like the Centers for Disease Control and Prevention (CDC) and the rest of the professional managers of the American empire—has become so arrogant that it stopped even looking at basic facts and fundamental theory to inform its decision making.

Back in 2008, they unleashed all kinds of quantitative easing and were universally celebrated for their genius, simply because the banking system seemed to be patched up, and the usual inflation didn’t seem to arrive.

Incredibly, they seem to have forgotten the very obvious reason for that “success.” The Fed was paying a higher rate of interest on bank deposits than banks could earn in the markets. As a result, the new money it created stayed in cold storage. Therefore, prices on the street, both producer and consumer prices, didn’t respond.

It wasn’t magic. It was a policy innovated by then-Chairman Ben Bernanke. It allowed him to save the banking system from falling apart, even while it protected the dollar from devaluation.

Here’s the real problem with a government program that seems to succeed. The experience unleashes an unmerited confidence in planning tools. From that point on, the Fed came to believe that it could fix any problem with more, more, and more quantitative easing, and there would never be a price to pay.

So you have Powell literally telling a congressional hearing that there seems to be no firm relationship between the rate at which it creates money and the resulting impact on the dollar’s purchasing power. This claim contradicts, oh, about a thousand years of monetary experience and scholarship on the subject. It also flies in the face of common sense.

What he seems not to have understood is the difference between cold-storage money and money dropped into society as if by helicopter. It’s a fundamentally different strategy. And the results are different.

Money is a tool of measurement that both facilitates trade—allowing us to move beyond barter—and makes accounting possible. It provides a way to measure the use of resources so that consumers and producers have a clear map of the reality around them. When you dramatically increase the quantity of the stuff circulating, with no other changes, the value of the money will decline. This is the fundamental lesson of monetary economics and is so undeniably true that denying it is akin to denying gravity itself.

The chart below, at bottom, illustrates what happened in the second week of March. In the previous year, the Fed was earnestly trying to fix its balance sheet when Anthony Fauci and Deborah Birx somehow convinced a weary and confused President Donald Trump to push for nationwide lockdowns. Congress promised to spend trillions to make up the difference. The Fed, apparently, figured it could make a big move and it just wouldn’t matter.

And so the Fed entered the markets as the first-round buyer of new Treasury debt. They wrote checks on their magic accounts that have no overdraft signaling device, which is a fundamental power that the Fed has that distinguishes it from any other institution (if you print money in your basement, you would be arrested for counterfeiting).

The result was an astonishing thing to behold: It doubled and eventually quadrupled the rate of increase in the money supply. The money wasn’t kept in vaults. It was literally dropped into bank accounts, ready to spend.

The gray in this chart is the wave of money. The red is the response from the producer sector, and the black is the consumer price response. This is called a lag. Looked at this way, anyone would shout: What the heck did these people think would happen? It’s almost cartoon-like.

Just eyeballing this, you can fully expect that price increases have a very long way to go before the disaster of 2020 and 2021 washes through the entire economy. It doesn’t and won’t happen all at once. This is why we keep getting tricked by little corrections in price increases. Oh look, copper is down and oil is down! This is good! Whoops, utilities and food are up again! What should we do?

This whole thing is a profound exercise in utter folly, completely beneath the dignity of anyone who purports to be an expert in monetary economics. It would be akin to a CDC that believes it can control and suppress the spread of a respiratory virus by placing stickers around the country telling people where to stand in an elevator. Except that they did do that!

The whole thing is utterly remarkable, first that it happened at all and second that the Fed believed it could get away with this despite all evidence of history. We truly are ruled by idiots.

This is more than a small error. It’s civilization threatening. The French Revolution took place in revolt against high inflation, and so did the Bolshevik Revolution. The Weimar inflation paved the way for a totalitarian takeover of a once-civilized country. Inflation is responsible for dozens of coups in Latin American history. The ending could be terrible or could be good as it was for the United States in 1980.

Regardless, the fate of money is very much connected to political stability or instability, as the toppling of former Prime Minister Boris Johnson in the UK and the deep disgruntlement with President Joe Biden both illustrate. The world is indeed on fire. At least part of the story here involves tremendous levels of incompetence by the Fed itself.

In other words, this isn’t just a flesh wound. Repairing the damage caused by the CDC–Fed–Congressional Industrial Complex is going to require some very painful surgery. That only happens once we stop denying reality. So far, things aren’t looking good.

I end with this news item: “The government of French President Emmanuel Macron has proposed 20 billion euros ($20.31 billion) in new measures aimed at softening inflation’s impact on French households.”