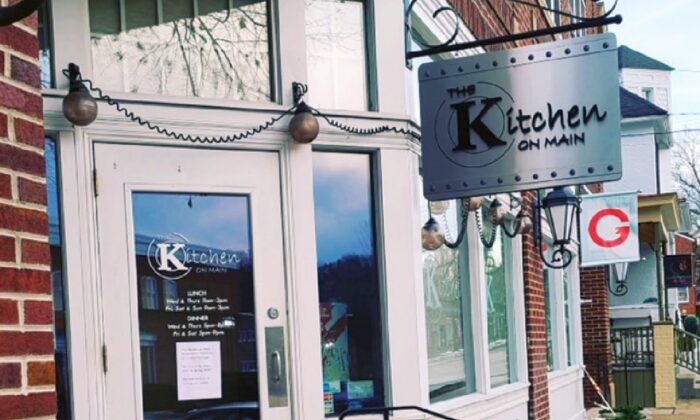 One of Rick McQuaide’s four restaurants, The Kitchen on Main in Ligonier, Penn., is temporarily closed. (Salena Zito)
Viewpoints

Of the four restaurants that Rick McQuaide owns across several counties in Western Pennsylvania, one is barely making a profit, two are losing money, and the fourth has been “temporarily” closed for far longer than he ever anticipated.

The 58-year-old small-business owner from Cambria County, Pennsylvania, has one word for why he finds himself in this position—and it isn’t pandemic.

“It is inflation,” he said.

McQuaide—whose family has also been in the trucking and logistics industry for 70 years—said what frustrates him is the reaction coming from the White House and much of the national media outlets on the severity of the problem.

“They seemingly shrug it off—maybe that happens because they’ve never owned a small business or maybe because they have jobs where they can absorb the costs with less pain,” he said. “They are wildly out of touch with the struggles of the average American and small-business person. That isn’t political, that is reality.”

McQuaide pointed to President Joe Biden downplaying the Labor Department report released on Jan. 19 that shows that inflation rose at the fastest pace in four decades in December 2021 (7 percentage points) as an example of how disconnected he is from the people he serves. Biden said that “we are making progress” and claimed that there was a reduction in inflation in the past month.

McQuaide isn’t seeing it. He said there isn’t an aspect of his business that hasn’t been upended by inflation. Fewer people are applying for jobs, driving up wages. Then, there are the prices of food and fuel.

That is, of course, if you can get the things you need.

McQuaide’s restaurants in Johnstown, Murrysville, and Ligonier, Pennsylvania, are famous for their crab cakes, but he had to stop selling them because they became so cost-prohibitive to his customers.

“A case of premium jumbo lump crab normally cost us $100 a case; over the past few months, that cost has spiked to $600 for that same case,” he said.

It’s not the only item that McQuaide has had to take off the menu.

“We’ve had to change menu items to lower-cost things or things that we can get readily available,” he said. “And we just don’t have the same variety that we used to.”

The cost of inflation “is not just killing our industry, it is hurting families as well,” according to McQuaide. He thinks that it would help if Biden and other politicians got out of Washington and saw what’s happening to small-town Main Street.

“If they saw it from my perspective, if they spent a week in my shoes or in consumers’ shoes, that might persuade them to address these issues with empathy and experience, rather than dismiss the urgency of the crisis,” he said, “a crisis I don’t see ending anytime soon.”