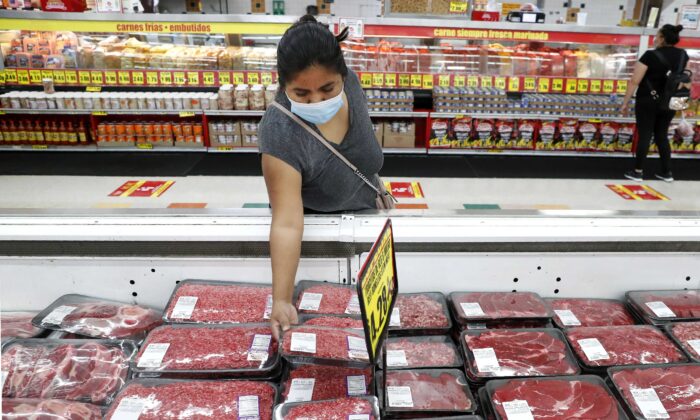 A shopper looks over meat products at a grocery store in Dallas, Texas, on April 29, 2020. (LM Otero/AP Photo)
Inflation

Many U.S. households are struggling to keep up with the growing cost of living as food and energy costs skyrocket.

In June, the Consumer Price Index (CPI) revealed that food prices advanced by 10.4 percent, with many staples rising by double digits from a year ago. Bread prices rose by 10.8 percent, chicken climbed by 18.6 percent, eggs soared by 33.1 percent, and milk increased by 16.4 percent.

Bureau of Labor Statistics data also highlighted the 41.6 percent jump in energy costs, which included a 98.5 percent spike in fuel oil, a 60 percent boost in gasoline, and a 13.7 percent rise in electricity.

While price inflation affects everyone, research reveals that the financial pressures of a sweltering broad-based CPI are being felt differently across the country.

A recent report from the Federal Reserve Bank of New York assessed the annual inflation rate for the major consumption categories, clocking in at 9.2 percent in May. This was higher than the official CPI rate of 8.6 percent.

“We find that, in contrast to inequalities in employment rates, disparities in inflation rates have widened during the recent inflationary episode, with Black and Hispanic Americans experiencing more inflation,” the report reads.

In 2020, before energy costs had skyrocketed, more than half (52 percent) of black respondents said they faced energy insecurity. A total of 47 percent of Hispanic and Latino survey participants also recorded the same challenges.

In March, a Wall Street Journal poll found that 58 percent of respondents noted that inflation was creating notable financial strain.

The newspaper’s study also noted that nearly half of people earning less than $60,000 per year said inflation could cause problems.

This is comparable to a late 2021 Gallup poll that confirmed that low-income households were more likely than high-income households to concede that inflation would be a significant hardship “that affects your ability to maintain your current standard of living.”

“At the bottom of the income distribution, some people don’t even have bank accounts—they work on cash. These are the people who are hit the most,” Juan Pablo Nicolini, a senior research economist at the Minneapolis Fed, wrote in a recent paper.

Inflation is a larger problem for rural communities than urban areas, according to a new in-depth study from the Iowa Small Towns Project at Iowa State University.

The study, “Impact of Inflation on Rural Household Expenses, 2021–2022” (pdf), reported that rural household expenses had advanced by 9.2 percent in 2022, while earnings edged up by just 2.6 percent.

“The current wave of inflation over the past two years has made rural families more vulnerable than urban ones to rising gasoline prices, higher fuel costs to heat their homes, and their ability to purchase less-expensive used cars,” the study reads. “Increased transportation costs are especially worrisome. Rural people have longer commutes to work, have to travel farther for daily needs like grocery shopping, and have to drive to larger cities for education and healthcare services.”

A total of 91 percent of rural households’ income was consumed by living expenses, leaving just $5,400 in expendable income. Urban households enjoyed a little more than $14,000 for any unforeseen expenses outside of their monthly budgets.

The Federal Reserve has been fighting price inflation by raising interest rates. The U.S. central bank is poised to bring the benchmark fed funds rate to at least 3.25 percent by the year’s end.

Experts say these inflation-busting efforts will still affect low-income consumers because they must contend with elevated inflation and higher borrowing costs simultaneously. A rising-rate environment can make it harder to obtain credit, borrow money, or service debts. This can ultimately result in lower demand and potentially a recession, because consumers will have less money to spend in an economy that’s two-thirds consumption-based.

The 75 basis-point rate hike last month already added an estimated $3.2 billion this year to existing credit card debt, according to WalletHub, a personal finance website. This is in addition to the extra billions of dollars from the previous rate increases.

But while the labor market continues to remain “hot,” Fed Governor Chris Waller told the Economic Club of Minnesota in May that the same people most affected by surging prices would be more likely to lose their jobs during the institution’s tightening cycle.

“We’re trying to lower the inflation tax on everybody, but there’s a small section of the society that may bear the brunt of that by losing their jobs,” he said. “There is no magical formula in a textbook that tells you how to do it. You kind of have to take your chances and see where it goes.”

“Of course, we never think too many people are working and fewer people need to have jobs. But we also think that you really cannot have the kind of labor market we want without price stability,” Powell said.

The Fed’s Summary of Economic Projections shows that the median unemployment forecasts were revised higher: 3.7 percent for 2022, 3.9 percent for 2023, and 4.1 percent for 2024 (pdf). As of this writing, the jobless rate stands at 3.6 percent.