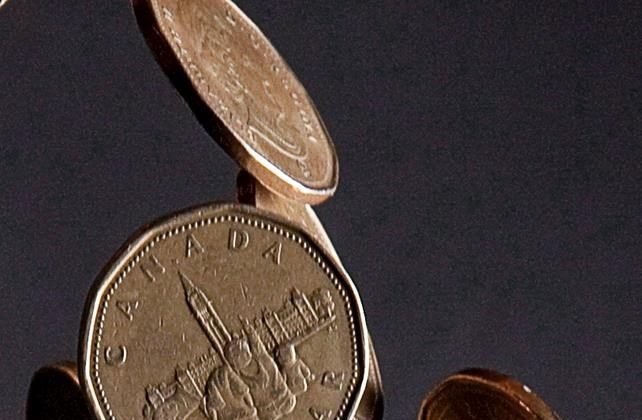 The Canadian dollar weakened on news of softer inflation on Oct. 19, 2018. (The Canadian Press)
Economies

Inflation Cools but Bank of Canada Expected to Hike Rates

OTTAWA—The annual pace of inflation slowed more than expected in September as increases in the price of gasoline eased compared with August.

Statistics Canada said on Oct. 19 that the consumer price index in September was up 2.2 percent from a year ago compared with a year−over−year increase of 2.8 percent in August.

Economists had expected the September figure to come in at 2.7 percent, according to Thomson Reuters Eikon.

Statistics Canada said prices were up in all eight major components for the 12 months to September.

However, the transportation group remained the largest contributor to the overall year−over−year increase in the index.

Food prices were up 1.8 percent, while shelter costs rose 2.5 percent. Alcoholic beverages and tobacco products were up 4.4 percent.

The inflation report comes ahead of the Bank of Canada’s rate decision next week when it will also update its forecast for the economy in its monetary policy report.

The central bank is widely expected to raise its key interest rate target, which sits at 1.5 percent, by a quarter of a percentage point.

The Bank of Canada aims to keep inflation within a target range of 1 to 3 percent and adjusts its interest rate target to help achieve that goal.

The average of the three measures of core inflation, which look to strip out more−volatile items like gas prices and are closely scrutinized by the Bank of Canada, was 2.0 percent in September compared with 2.1 percent in August.

In a separate report, Statistics Canada said retail sales fell 0.1 percent in August to $50.8 billion as sales moved lower in seven of 11 of the subsectors tracked by the agency.