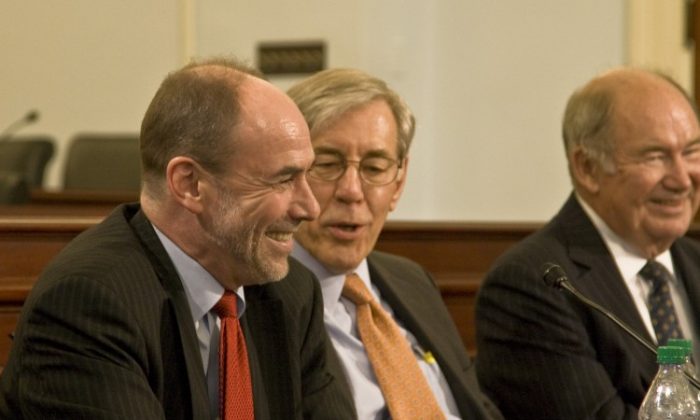 Inflation Can ‘Take Years, Not Months,’ to Cool Off: Former CBO Director

In an interview with Fox, Holtz-Eakin cited Federal Reserve Chairman Jerome Powell’s statement on Aug. 26 about inflation. “One of the things that Powell emphasized Friday was that the mistake that was made in the 1960s and 1970s was to declare victory prematurely, and then inflation came back with even greater ferocity. He has promised not to let that happen. So get ready for the Fed to finish this job,” Holtz-Eakin stated.

“I think he was quite clear at the beginning of this cycle that it would take years, not months, to control inflation.” As such, Holtz-Eakin is expecting potentially two more years of the Fed holding a restrictive policy.

During Powell’s remarks at the economic symposium in Jackson Hole, Wyoming, hosted by the Federal Reserve Bank of Kansas City, he warned about rocky times lie ahead for the American economy.

There will “very likely” be softening in labor market conditions, Powell said. High interest rates combined with slow economic growth and a soft labor market will “bring down inflation.” Households and businesses will feel “some pain.” These are “unfortunate costs” involved in reducing inflation, the Fed chair stated.

Holtz-Eakin pointed out that Powell never talked about engineering a soft landing of the economy in the Friday statement. “He’s always made the point that that would be the goal. That was missing entirely. He said, we are going to have to be restrictive and get ready.”

The 12-month Consumer Price index (CPI), a measure of annual inflation, has consistently remained at or above 7.5 percent every single month this year. It hit a four-decade high of 9.1 percent in June and was at 8.5 percent in July. When President Joe Biden took over the presidency in January 2021, the 12-month CPI was 1.4 percent.

The recently passed Inflation Reduction Act seems poised to add even more inflationary pressure on the American economy. In an interview with NTD, Michael Busler, a professor of finance at Stockton University, said that the act will neither reduce inflation nor speed up economic growth.

The United States is currently in stagflation, a combination of a stagnant economy with inflation, Busler pointed out. In the last three fiscal years, including the current one that ends in September, the federal government will have spent $7 trillion more than its tax revenues, which he calls inflationary.

“So the worst thing to be doing at this time when you have excess demand is to continue to government spend and add more excess demand,” Busler said. “That’ll make the inflation problem worse.”