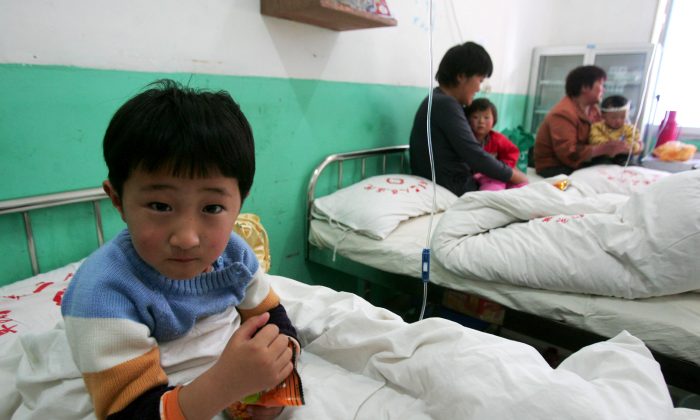 A young girl who suffers from the hand, foot and mouth disease undergoes treatment at a hospital in Fuyang City, Anhui Province, China, on April 28, 2008. (China Photos/Getty Images)
Social Issues

Chinese officials are tracking a couple of outbreaks of infectious illnesses that mostly affect children.

A norovirus outbreak was recently discovered in Beijing, with dozens of children infected in the past week alone. Meanwhile, hand, foot, and mouth disease (HFMD) spread throughout Anhui Province located in eastern China in September, infecting almost 10,000 people.

Beijing recorded 22 cases of norovirus infections last week, including 13 children in kindergarten, eight in elementary schools, and one in middle school, according to a notice by the Beijing Center for Disease Prevention and Control on Oct. 30. This number is significantly higher than the same period last year—and also an increase from the number of infections in the week prior.

Norovirus is highly contagious and is the most common cause of gastroenteritis, or the stomach flu. Its symptoms are diarrhea, vomiting, stomach pain, fever, and headaches. The infection usually develops 12 to 48 hours after exposure, and patients usually recover within one to three days. The illness mainly spreads through contact with an infected person or consuming contaminated food or water.

The Beijing disease control center said that based on historical data, the period between October and November is the peak season for norovirus infections in Beijing. It predicted that more cases of norovirus will be reported in the coming weeks.

Norovirus has a rapid mutation rate. It often causes outbreaks in crowded places such as child care centers, schools, hospitals, and nursing homes. There are currently no vaccines to protect against the illness; prevention involves proper hand washing and disinfection of contaminated surfaces.

HFMD is an infectious disease caused by a group of viruses, most commonly by the Coxsackievirus A16. Common symptoms are fever, nausea, vomiting, fatigue, and loss of appetite. Infants and toddlers are especially vulnerable and may develop blisters or bumps on the hands, feet, and mouth.

In recent years, China has had high rates of HFMD occurrence every other year. Chinese news portal Sina reported earlier this year that the total of HFMD cases in Henan Province in central China totaled 1,716 in March and 1,500 cases between April 1 and April 8, a significant increase over the same period last year.

One of the most serious outbreaks occurred in March 2009, when China’s Ministry of Health reported 41,846 cases of HFMD in 30 provinces and regions. Eighteen died as a result, with 94 in critical condition. Netizens suspected the true death toll may have been in the hundreds. At the time, local authorities—fearing bad publicity—had failed to report the epidemic, causing the disease spreading further.

Netizens had criticized the authorities for failing to act more swiftly to contain the disease—in addition to censoring online information about the spreading epidemic.