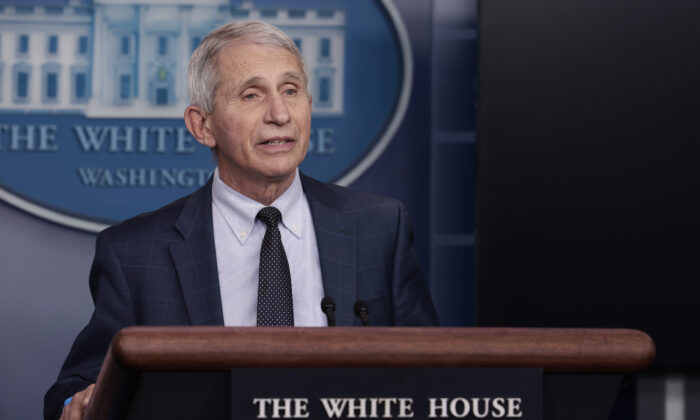 Dr. Anthony Fauci, Director of the National Institute of Allergy and Infectious Diseases and the Chief Medical Advisor to the President, gives an update on the Omicron COVID-19 variant during the daily press briefing at the White House in Washington on Dec. 1, 2021. (Anna Moneymaker/Getty Images)
Vaccines & Safety

A researcher who works for the agency headed by Dr. Anthony Fauci and two other scientists made the argument that schools should not mandate mask-wearing in schools, undercutting the federal government’s recommendation that they should.

“Many public-health experts maintain that masks worn correctly are essential to reducing the spread of COVID-19,” wrote Margery Smelkinson—who works for the National Institute of Allergy and Infectious Diseases headed by Fauci—along with Leslie Bienen, a faculty member at the Oregon Health & Science University–Portland State University School of Public Health, and Jeanne Noble, an emergency medicine doctor at the University of California–San Francisco.

“However, there’s reason to doubt that kids can pull off mask-wearing ‘correctly,'” they wrote for The Atlantic.

“We reviewed a variety of studies—some conducted by the [Centers for Disease Control and Prevention] itself, some cited by the CDC as evidence of masking effectiveness in a school setting, and others touted by media to the same end—to try to find evidence that would justify the CDC’s no-end-in-sight mask guidance for the very-low-risk pediatric population, particularly post-vaccination,” they added. “We came up empty-handed.”

While the National Institute of Health and National Institute of Allergy and Infectious Diseases describes masks as effective at stopping the spread of COVID-19, the researchers cited a CDC study that “found that U.S. counties without mask mandates saw larger increases in pediatric COVID-19 cases after schools opened” but noted the agency “again did not control for important differences in vaccination rates.”

“The CDC has cited several other studies conducted in the previous school year to support its claim that masks are a key school-safety measure,” their article states. “However, none of these studies, including ones conducted in North Carolina, Utah, Wisconsin, and Missouri, isolated the impact of masks specifically, because all students were required to mask and no comparisons were made with schools that did not require masks.”

Democratic-leaning “areas ignored … that much of the country reopened their schools last year. Now they are ignoring that much of the country’s schools are back to normal,” Smelkinson also wrote on her personal Twitter account, which says that “opinions expressed here are my own and not those of the NIH, HHS, or the fed [government].”

Mandatory mask-wearing in schools has become a contentious issue of late, as some governors have opted to issue orders to give parents the choice on whether their children should wear masks in class. Numerous studies have shown that children are at an extremely low risk of developing severe COVID-19 symptoms.