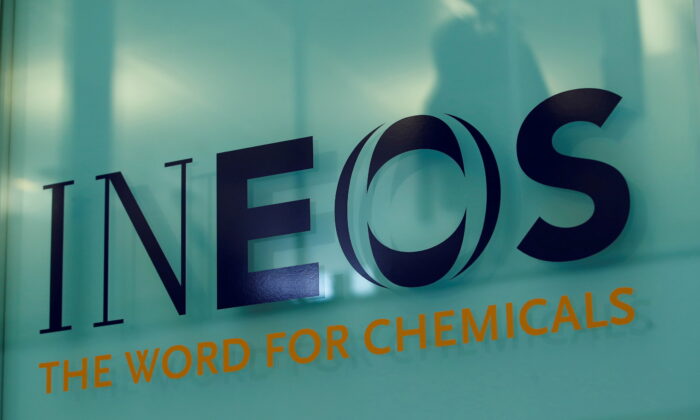 A logo is pictured in the headquarters of INEOS chemicals company during a news conference in Rolle, Switzerland on Nov. 13, 2017. (Denis Balibouse/Reuters)
UK

British Chemical and energy giant Ineos has written to the UK government with an offer to develop a test site to prove the safety of fracking in the UK.

It comes after the UK government said it’s “remaining open-minded” about fracking for shale gas in the North Sea and commissioned a review of the latest scientific evidence on shale gas extraction amid the energy shortage exacerbated by the Russo-Ukrainian war.

Fracking, or hydraulic fracturing, is a process in which liquid is pumped deep underground at high pressure to fracture shale rock and release gas or oil trapped within it.

The UK government imposed a moratorium on shale gas mining in England in 2019 after minor earthquakes were attributed to fracking in Lancashire—the only active site in the UK—operated by energy firm Cuadrilla.

But there have been calls from Conservative lawmakers for the ban to be lifted to alleviate the acute energy crisis that has been going on since last year, which has hit households with a more than 50 percent increase in energy bills.

The calls have grown louder since Russia invaded Ukraine on Feb. 24, prompting the UK to commit to phasing out imports of Russian oil by the end of the year.

Sir Jim Ratcliffe, founder and chairman of Ineos, said the UK is in a “ridiculous situation” that it ended up “in the midst of an energy crisis with ever-increasing prices driving people into fuel poverty whilst giving huge sums of money to oppressive regimes” despite having “so much gas under our feet.”

He said Ineos is willing to continue the work it had started before the moratorium and “develop a fully functioning shale test site to prove that this technology can be used safely by a competent operator.”

“We will happily invite anyone to inspect what we do and if, at that stage, the science proves there are problems then we will stop and make good the site,” he said.

“If, as we believe, the opposite is true, then we will at least have made a start in rebuilding our energy independence for an unpredictable future.”

In an article published on Sunday, Ratcliffe said “all reasonable commentators” recognise that the UK will need “a secure supply of gas” for the next 30 years until renewable energy sources become more reliable and argued that the “development of new fields in the North Sea” needs to be encouraged in order to achieve energy security.

He also hit out at politicians, saying the science on fracking was “totally ignored,” and that the politicians “reacted to a false public perception of the so-called dangers by introducing a moratorium on development.”

“Apparently the influential voice of a fashion designer carries more weight than any number of scientific experts,” Ratcliffe wrote, alluding to Dame Vivienne Westwood, who led a campaign against fracking.

Ratcliffe said fracking has been “demonised by an ignorant minority” while the technique has been “widely and safely used in the oil and gas industry for 50 years both offshore and onshore,” with over a million wells “drilled and safely operated for the past 15 years” in the United States that “transformed the energy security of that country.”

He also said that before the moratorium, Ineos had invested more than £250 million ($328 million) “in looking at the safe extraction of gas from UK shale” and had “identified significant reserves of gas across the whole of the North of England” with government support, only to have the investment “destroyed with the flick of a political switch” and the company was “not allowed to develop a single test well to prove that the technology could be operated safely.”

Professor: Fracking ‘Not An Obvious Route Forward’ in the UK

Professor Richard Davies, a petroleum geologist at Newcastle University, told NTD that the impact of fracking-induced earthquakes would be small and pose “very little risk” to human life, but he believes there are other bottlenecks meaning fracking may not take off in the UK as it did in the United States.

Davies said that historical data obtained through measuring “thousands of earthquakes” since the 1970s showed that “the Carboniferous rocks where the coal mining has been done—and these are broadly the same age rocks [from which shale gas would be extracted]—don’t release energy more than around magnitude three. So we’re pretty confident that there could be earthquakes, but the impact would be low,” he said adding that research carried out by the University of Bristol “also indicates they’re not going to be substantial.”

“In terms of human life, very little risk at all. They can be felt and they alarm people, and they worry people because, in the United Kingdom, we’re not used to [feeling] seismicity,” he said. “The maximum theoretical earthquake we could ever have is around magnitude six, but we wouldn’t expect one of those other than every 100 years or something like that.”

Davies suggested that the likelihood of earthquakes at potential sites can be predicted to a certain degree through three-dimensional imaging of the earth, but “some faults that are easier to see than others” depending on the geological style of the faults.

“And unfortunately, Lancashire, they’re very difficult to spot because their particular type of faults, which are difficult to image wherever you are in the world,” he said, referring to the UK’s only fracking site that was shut down following the earthquakes.

Davies said he doesn’t see shale gas as a potential major contributor to the UK’s energy supply because it’s difficult to drill enough boreholes needed to satisfy the country’s demand for gas, which is around three trillion cubic feet per year.

“The volumes of gas from a frack borehole are much lower than a conventional gas field,” therefore, “to make a difference in terms of our reliance on imports, you have to drill a lot of boreholes and will frack a lot of boreholes.”

“And that’s an important bottleneck, I’ll use the word bottleneck for why fracking is not an obvious route forwards in the United Kingdom,” he said.

“For each trillion cubic feet of gas, we estimate you would need between 2oo and 700 wells,” he said, adding the UK only has “a dozen or so boreholes” drilled in 10 years.

Davies said to drill hundreds of wells a year in the UK is “a big ask” because of the country’s high population density and lack of supply chains to quickly deploy rigs, and other differences from the United States, where sometimes “the farm owner owns the mineral rights, which they don’t in the United Kingdom.”

“So my own view is that shale gas was going to be a small contributor if it’s a contributor at all,” he said.