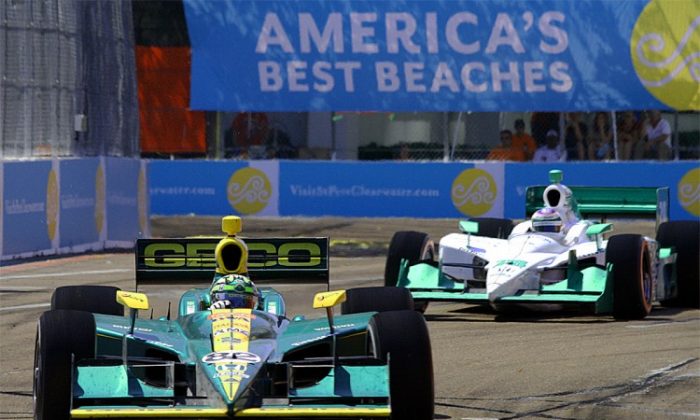 Dario Franchitti will want to start another championship-winning season with a victory at St. Pete. (James Fish/The Epoch Times)
Motorsports

Fans heading to St. Pete for the Honda Grand Prix of St. Petersburg, March 23-25, will see a lot more than just IndyCars racing through the streets of this picturesque Florida city.

Organizers have lined up nine support races to keep fans entertained between practice, qualifying and race sessions of the IndyCars. Pirelli World Challenge will be back, along with USF 2000, Star Mazda, the always exciting Indy Lights, and new for 2012, Ferrari Challenge will hold a pair of races.

“Race fans in St. Petersburg expect the best and so we’ve been hard at work securing the most entertaining lineup in racing,” said Tim Ramsberger, Vice President and General Manager for the Honda Grand Prix of St. Petersburg. “Staging 10 races is a record high for us and we’re excited to be bringing our fans the best on-track schedule yet. This year, our event will deliver the perfect mix of superstar drivers, fierce competitors and promising young talent, you will not want to miss it.”

On-track action has always been a drawing point of the St. Pete Grand Prix weekend—since the start eight years ago, the organizers have made a point of always having cars in action to keep fans excited.

2012 takes this to a whole new level. Between practice, qualifying and races, there will barley be time to grab lunch from the various food vendors and shop for souvenirs from the numerous merchandise trailers.

Tickets for the race weekend, featuring the first IndyCar race of the 2012 season plus all the other action, are available online at www.gpstpete.com or by phone at 1-877-283-5385.