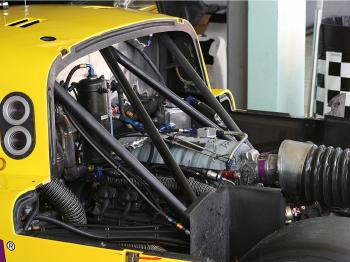 Thunder Under the Sun

By James Fish
Print
HOMESTEAD, Fla.—It is hot at Homestead, hot and humid in the early afternoon, and the intermittent clouds do no more than take the edge off briefly.

It’s loud because a few feet away, 650 bhp racing cars are blasting past at 210 mph. The IndyCars are practicing, and they are very fast and very, very loud.

They appear first as dots on the distant banking at the far end of the front straight. They grow swiftly in size and volume, tilting on edge as they climb the near banking, and with an almost painful roar they pass, sweeping swiftly through the corner, to be replaced by another, different in colors but sounding just the same.

The IndyCars are racing on Homestead-Miami-Speedway’s 1.5 mile banked oval. The banking is steep, but it is graduated from 18 to 20 degrees, making the high line as fast as the low line. It is a very fast track, and as with all short ovals, planning and setting up passing through traffic will matter as much as maximum speed. But in practice and in qualifying, as in the race tomorrow, the cars are driven at maximum speed. Their engines are run flat out for the entire race. And as each car blurs past, the thought might be, “Wow, that car is fast,” but the feeling is, ”Wow … that is Loud.”

A few hours later, the clouds are a bit thicker and the sun a bit less harsh. The temperature has dropped to 90 degrees. Now the Grand Am GT cars are qualifying.

Unlike the IndyCars, which sound alike as they all use Honda engines, the GT cars each have a distinctive sound. The Pontiacs have a deeper rumble, while the Porsches have a steady mid-range roar. The Mazdas are by far the loudest. They sound like stereo speakers when the bass is turned up too loud: a fast, rattling, metallic vibrating, almost as if the engines were full of broken bits of metal.

As the GT cars come around Turn Four of the road course, the drivers are hard on the brakes. The cars show the small signs of how close to the edge the drivers are pushing it; little fishtails, puffs of smoke from locked brakes and skidding tires. A car or two runs off the edge on the exit, kicking up puffs of dirt. But there is no audible screech of tires, no thump when the wheels hit the dirt beside the pavement. There is just the rattle, the rumble, the roar.

In the early evening, as the shadows stretch across the track, the Indy Lights line up for the start of the final race in their season.

During practice and qualifying, cars pass by one or two at a time.

During a race, when two dozen high-powered engines are revved to the limit simultaneously, the noise becomes a physical force, pressing against one side of the head as the field approaches, then on the other side as the cars drive away.

The sound is complex. On top is a sort of hollow, tearing roar, kind of a jagged noise, as all the cars’ pistons fire just a bit out of synch. Underlying that is a steady, droning buzz, which dopplers only slightly as the cars circle the other end of the track. It seems barely to decrease in pitch, pressure or volume. It seems the noise is so loud it defies space; it is omnipresent.

The sight of the cars, racing three wide through the corners, circling at the very limit of adhesion, canted twenty degrees from horizontal yet pressed to the track by centripetal force and their inverted wings, is almost washed away by the sound.

And I forgot my earplugs.