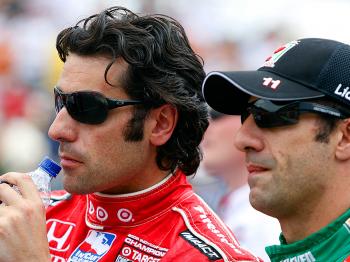 Dario Franchitti (L) and Tony Kanaan will be two of the three leaders of the new IndyCar drivers' association. (Jamie Squire/Getty Images)
Motorsports

The Drivers' Assocaition, similar to the Formula 1 Drivers' Association and the now-defunct Championship Drivers Association, will give drivers a unified voice to help the series management determine safety and competition regulations.

According to Autosport magazine, Dario Franchitti said, "A lot of us sit and talk, but to get everybody in a room together was the main focus.

"We'll get the opinions of everybody about safety—the things we see at the tracks that others don't. It's been a long time coming."

According to IndyStar.com, Tony Kanaan said the goal would be, “… to work with the league, not against it."

The IRL needs to make the rules and we need to follow them,” he said. “That’s why rules are rules.”

Drivers met during the Mid-Ohio race weekend (August 6–8) to finalize their plans.

Reaction to the Edmonton Decision?

The formation of the drivers’ association is possibly a reaction to the incident involving Helio Castroneves, Will Power, and Scott Dixon in the final laps of the Honda Indy Edmonton race.

Penske driver Helio Castroneves passed teammate Will Power after a restart two laps from the end, as did Target-Ganassi driver Scott Dixon.

Castroneves was penalized for breaking a no-passing rule invented by IndyCar Competition President Brian Barnhart, which rule appears nowhere in writing. The victory was handed to Scott Dixon even though he had never led a lap. Power, who had led almost the entire race, finished second.

Fans, announcers, and journalists were outraged to learn of the secret rule, which forces driver to let one another by, instead of allowing them to defend their positions, which is the norm is absolutely every other form of motorsports.

Barnhart, a holdover from the days when the series was run by Tony George, had received much harsh criticism for this and other behavior, including what some see as biased enforcement of this and similar rules.