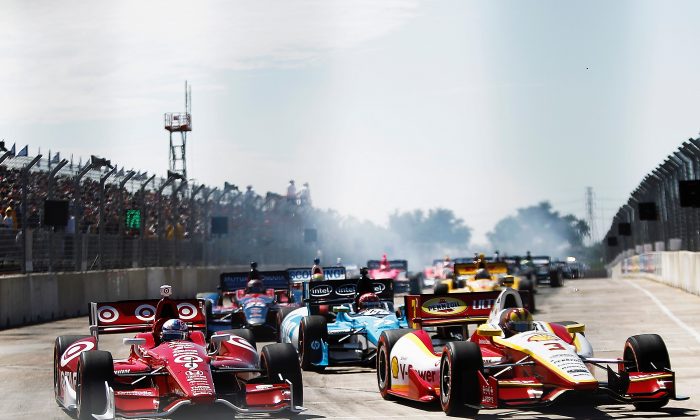 Scott Dixon, No. 9, and Helio Castroneves, No. 3, start the IndyCar Shell And Pennzoil Grand Prix of Houston Race No. 2 at Reliant Park on October 6, 2013 in Houston, Texas. (Bob Levey/Getty Images)
Motorsports

Points leaders Helio Castroneves, who had previously completed every lap of every race, was stricken with transmission trouble in both races of the double-header weekend.

Rival Scott Dixon won Saturday’s race thanks to a fortuitously timed caution period and finished second in Sunday’s finale, moving from 49 points behind to 25 points ahead of Castroneves.

Reversal of Fortune for Helio

Coming in to the two races of the Houston Grand Prix, Helio Castroneves had brought Penske racing three Indianapolis 500 wins but had never taken the season title. He finished second in 2002 and 2008 and third in 2003 and 2006, but lost twice to Sam Hornish, Jr. and twice to Scott Dixon. He also finished fourth four time—either a lot of success or a lot of frustration for a 14-year career, depending on one’s point of view.

For Helio Castroneves it must have been tremendously frustrating. At 38, the Brazilian native was running out of time to win that career-capping championship, and second is first loser for racers.

2013 was an unusual year in IndyCar. No one driver or team dominated. Seven different drivers won the first eight races, four winning for the first time in IndyCar. The only constant in the first half of the season was that Helio ran well, scoring a win, five top-fives, and nine top-ten finishes in the first 16 races. He took the points lead with a win at Texas in June and built on it until October.

Castroneves led the championship by 49 points coming into the 17th and 18th races of the season, the double-header at Houston. And for the first time since the season started in March, luck was not with him. After qualifying a miserable 21st for the first race, Castroneves had a gear cluster failure, which cost him nine laps. He finished 18th. His lead dropped from 49 to eight points.

Qualifying for Sunday’s race was rained out, so Castroneves, points leader entering the two-race event, started from the pole—a huge break for the Brazilian. But Helio was swiftly stricken with another huge break—three laps into the race he hit a bump so hard his transmission casing cracked. He eventually finished 23rd, 37 laps behind the leader.

Worse still, Scott Dixon had a great weekend. With one race left, the 500-mile finale at Fontana, Helio Castroneves could lose the championship while winning the race if Dixon can cross the line fifth or better. If Dixon finishes dead last, Helio will still need to finish fourth or better to hang on.

Better and Better for Scott Dixon

The 2013 season did not start well for two-time IndyCar champion Scott Dixon. The Target-Ganassi team usually provides its drivers with some of the fastest cars on the IndyCar grid, but the team struggled through the first several races. Dixon managed four top-five finishes in the first ten races, entirely because of his driving talent.

Everything turned around at Pocono. Dixon earned his first win of the season, and followed it up by sweeping the Toronto double-header, which left him only 29 points behind Helio Castroneves.

The next three races didn’t go so well. The 33-year-old Kiwi finished seventh at mid-Ohio, where team mate Charlie Kimball became the fifth driver to earn a first IndyCar in 2013.

Things got much worse at Sonoma. Dixon hit a Penske crewman while hustling out of the pits trying to preserve his lead. The resulting penalty set him back to 15th. Dixon won the pole for the Baltimore Grand Prix, but got taken out in an accident and finished 19th.

Dixon came to Houston with a 49-point deficit to overcome. The only way he could stay in the title hunt would be for Castroneves to have some disaster—not much to count on considering the Penske driver had finished every lap of every race of the season.

As it happened, Castroneves did run afoul of fate, and fate helped Scott Dixon at the same time. In the first race, Dixon pitted from the lead just as a yellow flag waved, closing the pits. Dixon rejoined in third, but the two cars ahead—Will Power and Luca Filippi—owed a pit stop. Power had the fastest car on the track, but had to fight through traffic after pitting, giving Dixon the win, as well as a bonus for most laps led.

Dixon was blessed again on Sunday, as Helio Castroneves had to return to the garages for major motor surgery after just ten laps. Helio’s Penske team mate Will Power won the race but Scott Dixon finished second, scoring 40 points and taking the championship lead.

The entire season comes down to one 500-mile race at Fontana’s fast two-mile oval. Scott Dixon and Helio Castroneves can win on ovals: Dixon’s first win of the season came at Pocono, while Castroneves won at Texas. The problem for Helio is that he only won at Texas, while Dixon has four wins.

The 2013 IndyCar season wraps up with the MAVTV 500 at Auto Club Speedway in Fontana, Calif., Oct. 19 at 8:45 p.m. ET. Tickets can be purchased through the Auto Club Speedway website. The race will be broadcast on NBCSN starting at 8 p.m. ET.