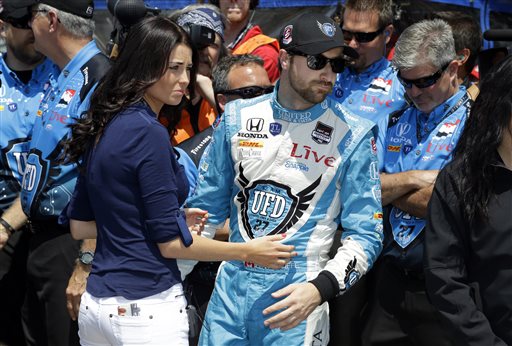 James Hinchcliffe, of Canada, watches with girlfriend Kirsten Dee as his speed is beat by Ed Carpenter to take the pole during qualifications for the Indianapolis 500 IndyCar auto race at the Indianapolis Motor Speedway in Indianapolis, Sunday, May 18, 2014. (AP Photo/Michael Conroy)
Motorsports

The IndyCar race at the Indianapolis Motor Speedway is slated for the Green Flag at approximately 12:12 p.m. EDT.

ABC will begin coverage of the race beginning at 11 a.m.

Live streaming will be available through Watch ESPN.

Check out the lineup below and an Associated Press preview below that.

James Hinchcliffe leaves the pits for a practice lap for the Indianapolis 500 IndyCar auto race at Indianapolis Motor Speedway in Indianapolis, Thursday, May 15, 2014. (AP Photo/Darron Cummings)

INDIANAPOLIS—Dale Earnhardt Jr. is going to watch. So will Jimmie Johnson, Jeff Gordon, Tony Stewart and Clint Bowyer. NASCAR’s biggest names all plan to tune in to the Indianapolis 500 to watch Kurt Busch run the first leg in his attempt to complete The Double.

Millions of other casual fans will also turn their attention to Indianapolis Motor Speedway on Sunday, where Busch’s debut will bring new eyeballs to the “Greatest Spectacle In Racing.” Although the Indy 500 has always been the crown jewel of motorsports, the slumping IndyCar Series struggles to gain much traction outside the showcase race.

“I think he does bring attention, and I think the series does need that added attention,” 2012 series champion Ryan Hunter-Reay said of Busch. “The racing in the IndyCar Series has been called the best kept secret in racing, and it is some of the best action out there, so I think it’s a great opportunity for some fans who wouldn’t necessarily tune in to check it out and see what it’s all about and how good the racing is.”

Fans will be treated to one of the most wide-open races in recent memory.

No single driver or team has risen to the top this season. And with so much attention on Busch, who will become just the fourth driver in history to compete in both the 500 and NASCAR’s Coca-Cola 600 on the same day, so many other elements of this magical race at historic Indianapolis Motor Speedway have been somewhat overlooked.

“I don’t know that there’s a favorite at all this year,” said Graham Rahal. “I feel like it is extremely wide open at this point, even as a driver myself, I couldn’t even tell you who I would pick. I have no clue.”

Indy is a race in which three owners — Andretti, Ganassi and Penske — typically have the cars to beat. That, at least, is no different this year as Andretti Autosport put three of its five entries in the top 10, while Team Penske got all three of its cars in.

“I’m sure we’ve got the winner sitting here,” Roger Penske said of Helio Castroneves, Juan Pablo Montoya and Will Power.

But Andretti feels just as strongly about its chances, especially after James Hinchcliffe qualified in the middle of the front row three days after he was medically cleared to drive following a concussion. He leads the five-car Andretti stable, which has Marco Andretti and Carlos Munoz in the two rows behind Hinchcliffe.

Further back in the field is Hunter-Reay and Busch, the former NASCAR champion who will start 12th in Marco Andretti’s backup car because he crashed his primary on Monday.

Ryan Hunter-Reay, bottom and James Davison, of Australia, head into the first turn on the final day of practice for the Indianapolis 500 IndyCar auto race at the Indianapolis Motor Speedway in Indianapolis, Friday, May 23, 2014. (AP Photo/Tom Strattman)

Juan Pablo Montoya, of Colombia, puts on his gloves as he prepares to drive on the final day of practice for the Indianapolis 500 IndyCar auto race at the Indianapolis Motor Speedway in Indianapolis, Friday, May 23, 2014. (AP Photo/Michael Conroy)

If one had to pick a favorite from that group, it would be Marco Andretti, who will make a ninth attempt at ending the family heartache in this race. His grandfather, Mario, won just once, in 1969, while father and car owner Michael never had the chance to drink the celebratory milk in victory lane.

Boy, does Marco want this.

“This is the biggest race in the world and I have so much respect for it and I want nothing more in my life than to add my name to the list of champions,” Andretti said. “I feel like I have the car and the team and the crew to do it, but being the ninth year in it and seeing everything under the sun go wrong, I can’t be overconfident.”

Adding to the angst had to be the sudden emergence of the Ganassi cars, which finally showed the speed they’d been lacking for two weeks on Carb Day. After lagging behind and failing to move into the final round of qualifying, defending race winner Tony Kanaan and defending IndyCar champion Scott Dixon went 1-2 in Friday’s final practice session.

“I think as we all know the competition is extremely tough and it looks like there’s many good cars out there,” said Dixon, noting the Ganassi organization has a penchant for dragging through race preparations and then showing up on Carb Day and race day. “We definitely don’t do it on purpose. But, yes, last year we kind of did the same thing, and the cars were actually pretty horrible in the race. Hopefully that’s not going to happen.”

Kanaan is one of three drivers in the field who can win a second consecutive Indy 500. Joining him in that quirky statistic is 1995 winner Jacques Villeneuve and Montoya, who won in 2000. Both bolted for Formula One the next season and finally make their long awaited returns to the Indy 500.

Villeneuve’s return has brought some attention, but few consider him a threat to win. Montoya? Everybody expects the Colombian to be in the mix. Although he’s struggled to regain his footing through the first four races of the season after 14 years away from IndyCar, Montoya quickly slipped back into form at Indy, a track he raced during his stints in both Formula One and NASCAR.

“I think I have a really good shot at winning it, I really do,” Montoya said. “With my oval experience in NASCAR and knowing this place really well, and being with Team Penske, chances of winning don’t come much better than that.”

There are many drivers in the field who feel this could be their year. From Ed Carpenter, who starts from the pole for the second consecutive Indy 500, to dark horses Josef Newgarden, Justin Wilson and Buddy Lazier, one of six former race winners in the field.

“Last year, there were nine guys that could win this race, this year I think it is double,” Kanaan said. “Honda caught up with Chevy, last year I think Chevy had an advantage, we don’t know fuel mileage right now, nobody is going to want to lead, saving fuel is going to be a huge factor. If you are not the leader, which is the most exposed guy on earth, then you are going to be saving. We simply don’t know how this thing is going to play out.”