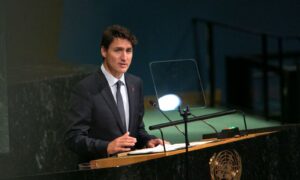 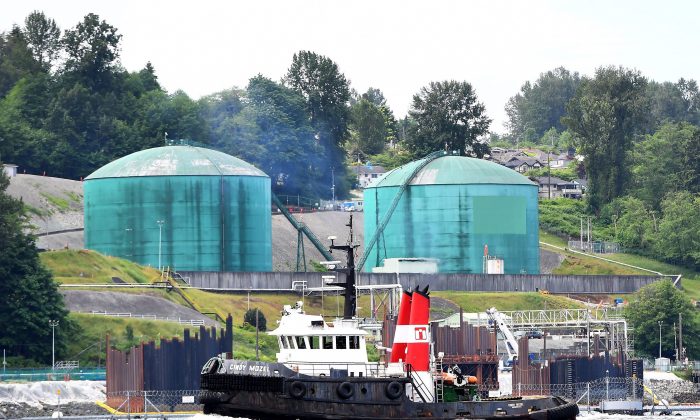 A tugboat passes by Kinder Morgan’s Trans Mountain marine terminal in Burnaby, B.C., on May 29, 2018. (The Canadian Press/Jonathan Hayward)
Canada

CALGARY—Canada’s energy industry welcomed news on May 29 that the Trans Mountain expansion pipeline is more likely to be built, but expressed grave misgivings over Ottawa’s decision to buy the project for $4.5 billion in order to achieve that goal.

Canada needs infrastructure like that designed to triple Trans Mountain’s capacity to move crude oil and refined products from the Alberta oilsands and Edmonton refining complex to the West Coast, said Chris Bloomer, CEO of the Canadian Energy Pipeline Association.

But he said the association is “deeply concerned” that the government felt it had to purchase the project to get it built. Ottawa’s move comes 18 politically fraught months after it had been approved.

“Something had to happen,” Bloomer said of delays blamed on opposition by British Columbia’s provincial government, municipalities, Indigenous groups, and individual protesters.

“It’s a little confusing that the government felt it needed to nationalize this asset and own it in order to assert what we all thought along the way was its jurisdiction.”

Pipelines that cross provincial borders are federally regulated, but B.C. is arguing in a court challenge that it has the right to restrict diluted bitumen shipments within its boundaries.

The situation has created a “confused” marketplace in which different pipeline projects are treated unequally and no one knows the rules future proposals are expected to follow, Bloomer said.

Prime Minister Justin Trudeau said at a conference on May 29 that federal control over the pipeline could simplify development of at least this project.

“When you shift the ownership of the pipeline from a private corporation to … a federal government that has explicit control over resource projects that go between provinces, a lot of the legal barriers and a lot of the challenge points actually disappear,” he said.

The federal move is welcome to get the stalled project going, said Tim McMillan, CEO of the Canadian Association of Petroleum Producers, adding he also is pleased that Ottawa has committed to putting the project back in private hands “where it belongs.”

“I think these are extraordinary circumstances and we should work very hard never to find ourselves in this position again.”

Kinder Morgan Canada will work with the government to try to find a third party to buy the assets by July 22. Separately, Finance Minister Bill Morneau said there is no absolute deadline to find a buyer.

The company had ceased all non-essential spending on the Trans Mountain expansion in April, vowing to cancel it by May 31 unless it received assurances it can proceed without delays and without undue risk to shareholders.

After the federal government’s announcement, Steve Kean, CEO of both Kinder Morgan Canada and its parent company, said the work would be restarted soon, with the government funding construction. The sale, which must still be approved by Kinder Morgan Canada shareholders, is expected to close in the second half of the year.

Analysts were less than enthusiastic about the sale.

In a research note, Desjardins Capital Markets analysts questioned whether construction of the controversial pipeline would proceed any smoother under government ownership.

The transaction could further “galvanize opposition” from special interest groups while complicating the government’s ability to provide protection for construction sites in the Lower Mainland of B.C., including its willingness to call in the RCMP if needed, they said.

“We maintain our previous concern that the federal Liberal government will likely be highly reluctant to exercise force approaching the window of the next election cycle, expected next fall,” they wrote.

They said the news is otherwise positive for the oil and gas sector, though it will have no effect on tight pipeline takeaway capacity until at least 2021. Transport limitations have been blamed for higher price discounts on western Canadian oilsands bitumen blend crude in the first quarter.

Pipeline customers Suncor Energy Inc. and Cenovus Energy Inc. welcomed the move as a sign Ottawa recognizes the importance of getting more Alberta crude from the oilsands to more markets.

However, GMP FirstEnergy said the buyout was negative for future Canadian investment prospects.

“The federal government has set a precedent that it will nationalize projects of significant importance rather using the rule of law and prior regulatory approvals to push a project forward under private ownership,” its analysts said in a report.

Meanwhile, opponents of the expansion say protests are likely to increase now that Ottawa has agreed to buy the pipeline. Activist Tzeporah Berman says she expects opposition to the project to be even bigger than the so-called War in the Woods, where she and other protesters fought logging on Vancouver Island in the 1990s.