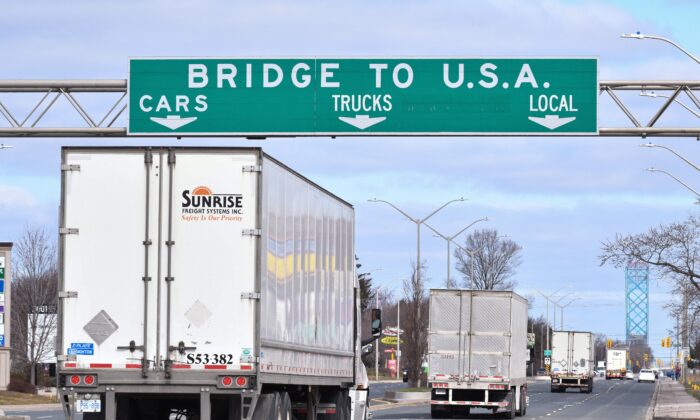 “Ottawa’s plan to require all truckers entering from the United States to show proof of vaccination starting Jan. 15 cannot happen at a worse time,” Sylvain Charlebois, professor and senior director of the Agri-Food Analytics Lab at Dalhousie University, said on Twitter on Jan. 10.

“I’m not sure Canadians are aware of how fragile our food supply chain is right now, due to Omicron.”

The Liberal government announced in mid-November that truck drivers coming into Canada would need to be fully vaccinated by Jan. 15. Up until then, truckers had been exempted from the mandate as they are considered essential service providers.

But on the evening of Jan. 12, Canada Border Services Agency spokeswoman Rebecca Purdy told The Canadian Press that Canadian big-riggers would not have to quarantine upon re-entering the country if they are unvaccinated or have received only one dose.

Yet on Jan. 13, the federal government backtracked on Purdy’s claim, saying the original rules stayed.

“Let us be clear: This has not changed. The information shared yesterday was provided in error. Our teams have been in touch with industry representatives to ensure they have the correct information,” said Health Minister Jean-Yves Duclos, Transport Minister Omar Alghabra, and Public Safety Minister Marco Mendicino in a joint statement.

“Today’s reversal on the reversal by the government will only make Canada’s cost of living crisis worse by driving the price of basic essentials like groceries up,” she posted on Twitter on Jan. 13 following the ministers’ announcement.

“When Canadians need more certainty—they get less. This is a mess.”

In an interview with CP24 Tonight on Jan. 13, Charlebois said the vaccine mandate on truckers is akin to cutting “the flow of blood” of a person.

“If you cut anything, if you disrupt that flow, that fluidity, you will end up seeing empty shelves, higher food prices,” he said.

“Unfortunately, because on our side, we actually buy for well over $21 billion worth of food products [from the] U.S. every single year, and almost 70 percent of it actually goes through the border on wheels with truckers, and so there’s a lot of business, and a lot of that business happens between November and March.”

The mandate, once it comes into force on Saturday, Jan. 15, will require Canadian truckers to “meet requirements for pre-entry, arrival, and Day 8 testing, as well as quarantine requirements,” said the ministers in the joint statement, as these truckers “can’t be denied entry in Canada.”

For non-Canadian truckers crossing from the United States, they will be directed back if they cannot provide their proof of vaccination or a valid medical contraindication to the COVID-19 vaccines.

Charlebois said the screening of every truck at the land borders will slow everything down, from transportation to warehousing to distribution, and will drive up food prices.

“When you slow things down with supply chains, it will end up costing more, costing more for consumers in the end,” the professor told CP24.

“We were expecting food prices to go up by as much as 7 percent in 2022. This could actually put the inflation rate at a much higher level for 2022 as a result of this disruption, unfortunately.”

Ron Foxcroft, chairman and president of Fluke Transportation, says the last-minute reversal by Ottawa puts the trucking sector in “peril.”

Foxcroft agreed with the host that the mandate will not only sideline thousands of truckers, but it will also affect every Canadian who needs essential goods eventually.

But if more truckers choose to leave the sector for good, Canadians will bear the brunt of it.

Stephen Laskowski, president of the Canadian Trucking Alliance (CTA), echoed Foxcroft’s sentiment of vaccinated truckers being sidelined when the vaccine mandate kicks in.

Meanwhile, the United States is preparing to impose similar restrictions on Canadian truckers on Jan. 22.

Laskowski said the CTA has been warning the Canadian and U.S. governments that this is not the right time to implement the mandate.

“Both Ottawa and Washington appear not to heed our warnings,” he said.

“They are not heeding the warnings of other members of the supply chain, our customers, and we’re about to understand those consequences on Saturday.”