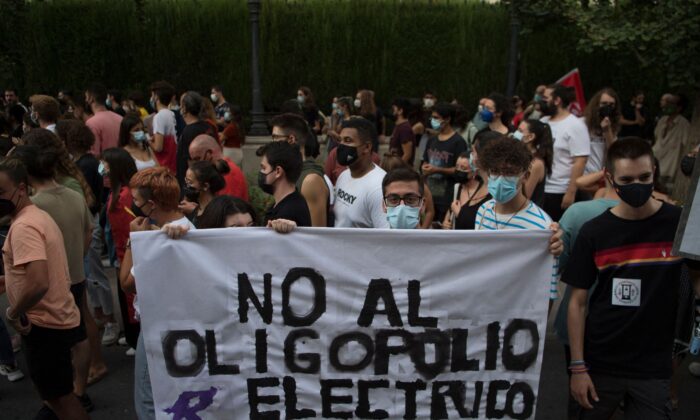 People protest during a demonstration against the increase of household electricity bills in Granada, Spain on Sept. 19, 2021. (Jorge Guerrero/AFP via Getty Images)
Inflation

Spanish inflation accelerated to its highest level in almost four decades as the country continues to grapple with soaring energy prices while citizens grow impatient with the government’s efforts to control the situation.

Estimated annual inflation of the consumer price index (CPI) in March was 9.8 percent, according to data from Spain’s statistics office. This is the highest rate since May 1985 and represents a more than two-point increase from February, when inflation had risen by 7.6 percent.

Estimated annual rate of underlying inflation, which excludes energy and non-processed food products, was up 3.4 percent in March, the highest since September 2008.

“This development is due to generalized increases in most of its components. These included increases in electricity prices, in fuels and oil prices, and in food and non-alcoholic beverages prices, higher this month than in March 2021,” the office said in a March 30 press release (pdf).

The latest numbers come a few days after Spain’s Economy Minister Nadia Calvino said that the country will not see double-digit inflation for the full year. In an interview with the local La Sexta TV channel, Calvino also promised to rein in the rapidly rising energy prices by implementing measures such as curbing the windfall profits of power utilities.

The rising inflation has angered Spanish citizens, with many taking to the streets to protest against the situation. Though the Russia–Ukraine war has been blamed for soaring inflation, people have mostly discarded such excuses.

“They hike the light and gas prices and say it’s because of [Russian President Vladimir] Putin, but that’s a lie. It was like this before,” Anabel, a 56-year-old participant of a recent protest, said to AFP.

“Light prices really affect [my family] because some of us work from home, and we can hardly put the heating on because the price of gas has almost doubled over the past six months.”

Industry groups have also held protests. Lorry drivers launched an open-ended strike on March 14 due to rising fuel costs. Taxi drivers have also protested. Fishermen have taken part in strikes, citing rising diesel prices as the cause of continued losses.

The livestock industry has objected to the increasing cost of animal feeds. Spain’s two top unions, the UGT and the CCOO workers union, have protested against inflation, with thousands taking part in the demonstrations.

Spain’s industrial production prices had risen by an annual rate of 40.7 percent in February, the fifth straight month of increase and the highest since January 1976.

The increase was led by a 114.4 percent surge in energy costs compared with the same month last year. Businesses tend to pass on the rise in prices to customers, thereby driving up inflation in the economy.