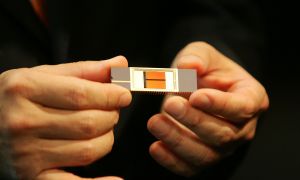 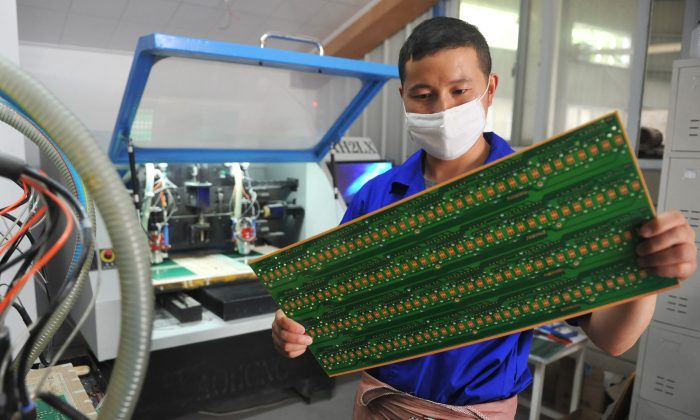 A worker checking a circuit board at a factory in Hangzhou in China's eastern Zhejiang province on May 22, 2018. (-/AFP/Getty Images)
China Business & Economy

According to Chinese customs data, the country imports as much as $300 billion worth of semiconductors annually, making it the largest import category by value.

Recently, two senior Chinese officials have pointed out the gaps between China’s chip-manufacturing capabilities compared against those of leading producers such as the United States, South Korea, and Taiwan, explaining from their perspectives why China continues to lag in developing the technology for making chips that power virtually all electronic devices.

Zhang Guobao, former head of the National Energy Administration and former vice director of the National Development and Reform Commission, wrote in a June 10 commentary published in China Economic Weekly that he believes there are four major factors that have curbed China’s progress in developing semiconductor technology: lack of money, the country’s economic system, insufficient talents, and the inability of the supply chain to provide enough support, with the last two being the most critical.

Many Chinese chip makers that are performing well are private companies that were established after 2000, a turning point when a number of businessmen returned from abroad and brought with them knowledge from the West, Zhang said.

Yet, despite the progress, Zhang believes there’s a long road ahead for China to catch up with its international peers.

Ni Guangnan, an academician at the state-run Chinese Academy of Engineering, said that 80 percent of the equipment for making China’s chips relies on imports from global semiconductor leaders such as the United States and Japan, putting China at a disadvantage. Some materials such as photoresist, a light-sensitive material for coating, are entirely sourced from overseas, state-run media Xinhua reported.

“From the perspective of supply chain stability, as soon as supply from one of the links in the chain is halted, the entire manufacturing industry will be impacted,” Ni told state media China Daily in a June 12 interview.

In May, U.S. authorities blacklisted Huawei due to security concerns, effectively barring it from doing business with U.S. companies. Although Huawei claims to have independently developed chips as a backup, in case its access to foreign suppliers is cut, some experts have questioned whether the company can survive on its own chips.

Huawei develops and manufactures chips through its HiSilicon subsidiary.

In an article titled “Can HiSilicon’s Chips Save Huawei?” Li Bin, who claims to be a former Huawei employee and a 20-year veteran in the chipmaking industry, said that the company’s backup chips are only for deceiving the layman.

“The backup is there, sure, but whether it’s usable or useful would be a different story,” Li wrote. His article was reposted by many Chinese media outlets, including Tencent News.

Li said it would be a “miracle in the technological history of humankind” if Huawei could realize the goal of fully supplying the chips, software, and operating system for its own electronic devices, because even if the company is able to replace its current U.S.-supplied components with its own, adapting and testing the parts would take months.

Every electronic device is made up of tens or even hundreds of thousands of components, making it impossible and economically unfeasible for companies to develop everything on their own, Li said.

“As long as the United States discontinues its supply of chips … 99 percent it’s likely Huawei will die, without a question,” Li wrote, adding that the United States also dominates in creating chip-designing software.

Ni, who is also a researcher at the state-run Chinese Academy of Sciences—the most prestigious research institute in China—said that the tools for designing chips are weak in China. Chip design calls for the use of electronic design automation (EDA), which allows the designer to analyze, simplify, and improve the design through computers. The three major suppliers of such software are all U.S. firms.

In 2015, Beijing initiated an ambitious plan called “Made in China 2025,” aimed to advance the Chinese semiconductor industry until it can supply all of China’s chip demand. Yet industry insiders remain skeptical of the effort, pointing to many areas where China still depends upon imported technologies.

“Compared to the constraints of equipment, materials, or talent, I think what China lacks more is understanding of the industry,” Gu Wenjun, a senior analyst at the Shanghai-based consulting firm ICWise, told Reuters in a recent report.