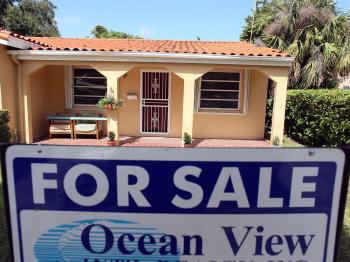 A 'For Sale' sign is seen in front of a home on October 21, 2009 in Miami, Florida. (Joe Raedle/Getty Images)
International

Industry Brighter, But It’s Not Over Yet, Says Panel

The real estate industry in general is at its most severe, yet residential is going to drop another 7 to 10 percent, according to Nouriel Roubini, celebrated economist and co-founder and chairman of RGE Monitor.

“There is a risk of a double dip,” Roubini said at The 5th Annual Real Deal Forum at the Lincoln Center in New York. “About one third of sales are distressed sales, short sales.”

Pamela Liebman, president and CEO of Corcoran Group, said her brokers are mostly busy. “It’s like a different world out there,” Liebman said. “Buyers here come back… because they have a lot more confidence.”

Liebman’s team recently sold the Madoff house and donated the commission to the victim’s fund—a gesture that drew great applause from the crowd of around 1,000.

She said housing price averages in New York have dropped around $300,000 in the last year.
Miki Naftali, president and CEO of EL AD GROUP, agreed that the bottom has been reached in the New York market. There has been a major pick-up in transactions in the last 2 to 3 months, he said.

The condominium market has bottomed out, but co-ops are still going down, said Dolly Lenz, vice chairman Prudential Douglas Elliman. She said co-ops are slower at filling up as some boards are reticent in dropping prices too much—resulting in their own property being worth less.

New York has done well, considering that the center of the crisis was here, said Mark Zandi, chief economist and co-founder of Moody’s Economy.com.

“The recession is over and I think the New York recession is also over,” he said. “It’s going to be a slog but it feels really good compared to where we were 6 to 9 months ago.”

Zandi said businesses are curtailing their layoffs but they’re not hiring. “I think that’s a concern.”