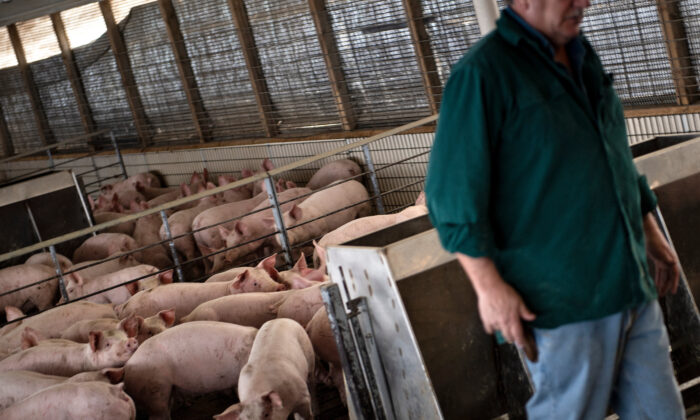 A farmer walks through a hog pen on his farm in Polo, Ill., on Jan. 25, 2020. (Brendan Smialowski/AFP via Getty Images)
Judiciary

The pork industry is asking the Supreme Court to strike down a voter-approved law in California that would ban the sale of pork in the state from hogs raised anywhere in the world that fail to meet the state’s production standard requiring that each sow be given a specific amount of space, which exceeds industry norms.

California officials are drafting implementing regulations for the law, which supporters promoted as an animal welfare measure, that will take effect Jan. 1, 2022. To continue selling pork to the 40 million consumers who live in the state, which represents about 15 percent of the U.S. pork market, pork producers would have to switch to new sow housing systems at a cost in the billions of dollars, new expenses that will be borne by consumers through increased pork prices, according to the American Farm Bureau Federation.

“We’re asking the Supreme Court to consider the constitutionality of one state imposing regulations that reach far outside its borders and stifle interstate and international commerce,” National Pork Producers Council President Jen Sorenson said in a statement.

“In this case, arbitrary animal housing standards that lack any scientific, technical or agricultural basis and that will only inflict harm on U.S. hog farmers.”

The petition in the case, National Pork Producers Council v. Ross, court file 21-468, was filed with the Supreme Court on Sept. 27. The other petitioner is the American Farm Bureau Federation (AFBF). Karen Ross, a respondent, is secretary of the California Department of Food and Agriculture (CDFA). The other respondents are Dr. Tomás Aragón, director of the California Department of Public Health, and Rob Bonta, the state’s attorney general.

The appeal comes after the U.S. Court of Appeals for the 9th Circuit ruled against the petitioners in July, finding there was no violation of the Constitution and that the new law could lead to “dramatic upstream effects and … pervasive changes to the pork industry nationwide.” The petitioners argue that the decision conflicts with other federal circuit court rulings.

Proposition 12 makes it both a criminal and civil violation to sell pork in the state “unless the pig it comes from was born to a sow—an adult female—that was housed with 24 square feet of space and in conditions that allow the sow to turn around freely without touching her enclosure,” according to the petition to the Supreme Court.

Almost no commercially bred sows in the United States are given 24 square feet of living space, “even those raised in group pens; and farmers almost universally keep sows in individual pens that do not comply with Proposition 12 during the period between weaning and confirmation of pregnancy, for animal health and business reasons.”

The petitioners argue that the Commerce Clause gives Congress the authority to regulate trade among the states and restricts states from regulating commerce outside their borders, except for public health and safety-related reasons.

“Small family farms well beyond California’s borders will be hit hardest as they are forced to make expensive and unnecessary changes to their operations,” said AFBF President Zippy Duvall in a statement.

Steve Lyle, director of public affairs for the California Department of Agriculture, when asked about the appeal to the Supreme Court, said, “We have no comment at this time.”