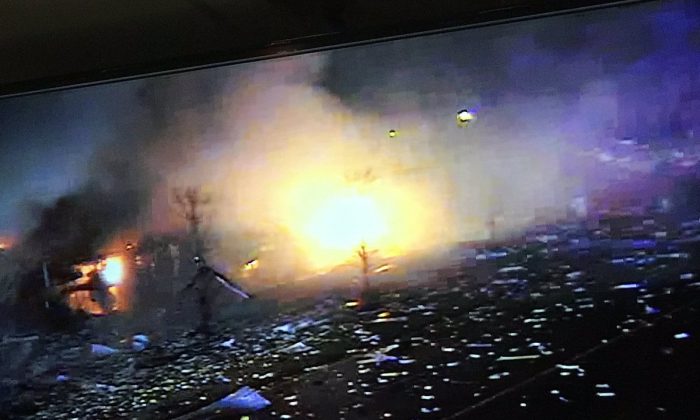 The moment of an explosion in the the suburb of Chicago is captured on camera. (Lake County Sheriff)
US News

A massive explosion “leveled” an industrial plant, shook houses over 15 miles away, and left a fire raging in a Chicago suburb.

Four people have been hospitalized, according to the Chicago Tribune, after an explosion at a silicone factory in Gurnee, a suburb to the north of Chicago.

“We have fire and structural damage indicative of an explosion,” Steve Lenzi, spokesman for the Waukegan Fire Department, told the Tribune. “There is very heavy damage.”

The blast went off on May 3 at AB Specialty Silicones, a silicone plant in an industrial facility, according to Waukegan fire and police officials, reported WGNTV.

The site of #explosion in #gurnee that shook homes across lake county is near Subset Ave and Northwestern in Waukegan. pic.twitter.com/X8njzjBbq3

The explosion was felt and heard in many neighboring towns and suburbs, according to reports and videos on social media which captured the moment of the explosion at around 9:30 p.m.

Around 10 p.m., the Lake County Sheriff’s Office issued an alert via Twitter: “We are aware of a very loud explosion sound and ground shaking in the Gurnee area. We are working to determine the cause.”

Sir Please find the footage from my outdoor cam pic.twitter.com/YgIdWPaeTG

Even many miles from the scene, the explosion was loud enough for residents to believe there had been a crash or explosion in their neighborhood.

“I live in Antioch, 17.1 miles away and it shook my entire house,” wrote one person on social media. “I called police…”

Eyewitness Megan Hener told the Tribune she went down to the scene of the explosion and posted pictures on social media of the plant was now flattened.

“It was leveled. It’s right across from the emission testing station,” she said, in reference to a state of Illinois facility.

The site of #explosion in #gurnee that shook homes across lake county is near Subset Ave and Northwestern in Waukegan. pic.twitter.com/X8njzjBbq3

According to NBC, nearly 1,000 Lake County residents were left without power.

Many pictures on social media show the fire burning, and the moment of the explosion was caught on various cameras, such as porch cams, and posted to social media.

“What was that massive explosion? I’ve never heard anything so loud,” wrote Lori Taylor on Twitter. “Our house shook in Wadsworth.”

One on-the-spot witness told Chicago’s WLS-TV that she saw “debris and sparks flying everywhere” after hearing  “a large boom.”

She saw a building “engulfed in flames” and heard another “large boom.”

The fire department said that they do not believe there is cause for concern about air quality or need for a shelter-in-place order, according to Local State Representative Joyce Mason.

According to WGNTV, police said late on May 3 that an “active search and rescue” operation was still underway at the site.