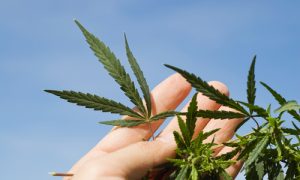 National regulated production and marketing of industrial hemp became legal on Dec. 20, when President Donald Trump signed the Agriculture Improvement Act of 2018, removing hemp from the list of controlled substances.

The House of Representatives voted 369-47 for the legislation on Dec. 12, after the Senate approved it 87-13 on Dec. 11. President Trump called the bill a bipartisan success.

“Now to the farm bill,” said Trump. “We are proudly joined today by so many members of Congress, Republicans, Democrats, who worked very, very hard on this bill. This was really an effort of everybody. It was a bipartisan success.”

The 2018 Farm Bill allows farmers to cultivate hemp crops with less than 0.3 percent concentrations of the psychoactive compound delta-9-tetrahydrocannabinol (THC). The bill also allows farmers to get crop insurance, apply for loans and grants, and furthers research and development protection for industrial hemp.

“So good for the country, and I want to thank all of the people here including the many Democrats who have really worked hard on this bill,” said Trump.

While hemp and marijuana are both a type of cannabis plant, they are also very different. Marijuana can contain up to 30 percent THC, an intoxicating substance. Conversely, hemp contains less than 0.3 percent THC and contains more Cannabidiol (CBD), a compound with medical benefits.

Some of the other possible uses for industrial hemp include biodegradable plastics, paper, textiles, construction materials, health foods, cosmetics, animal feed, and fuel.

FDA Commissioner Scott Gottlieb made it clear in a press release on Dec. 20, that the Food and Drug Administration is committed to protecting and promoting the public’s health, and will continue to strictly regulate products, foods, and dietary supplements containing cannabis or cannabis-derived compounds.

The 2018 Agricultural act also provides benefits for struggling dairy farmers, introduces a prohibition on the slaughter of dogs and cats for human consumption, has improved funding for pest and disease prevention, and delivers assets for broadband infrastructure loans and grants to connect rural communities to the global economy.

“Through fires, floods and freezing weather, we will always stand with the American farmers,” said Trump. “The farm bill doubles the amount of farmers that they can borrow to expand and improve their farms … It opens new markets for American agriculture all over the world. In addition to signing this critical legislation today, I am directing my administration to take immediate action on welfare reform.”

Trump used the opportunity at the press conference to address his views on the necessity for tighter work requirements for food stamp recipients and revision of the Supplemental Nutrition Assistance Program (SNAP.)

“Today’s action will help Americans transition from welfare to gainful employment, strengthening families and uplifting communities and that was a difficult thing to get done but the farmers wanted it done,” said Trump.

“We are ensuring that American agriculture will always feed our families, nourish our communities, power our commerce, and inspire our nation.”