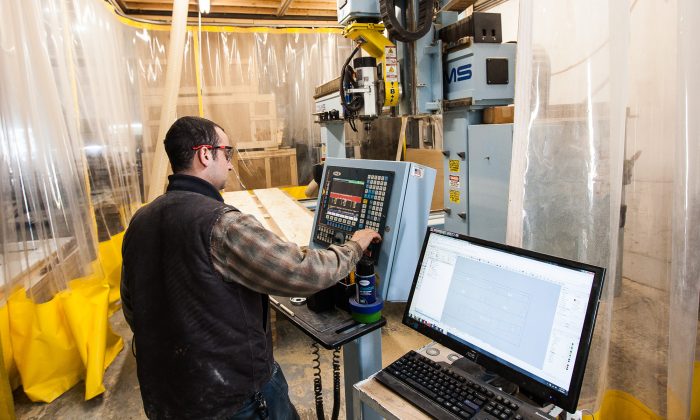 NEW YORK—When a waterfront condo can sell for well over $1,500 per square foot in the outer boroughs, the market gives little incentive to develop industrial space that goes for closer to $10 per square foot.

The city has been supporting the industrial sector through methods like zoning and tax incentives because of the higher wage jobs with low barriers to entry these businesses provide. Even more so now that the industry has stabilized and the progressive administration is looking for ways to provide the people of the city a way to the middle class.

Under former mayor Michael Bloomberg, the city created an the Mayor’s Office of the Industrial and Manufacturing Business, which was later replaced by the industrial desk at the Economic Development Corporation. The city also created Industrial Business Zones (IBZ), which are areas already used for industrial purposes that the city promises not to rezone. But it is not a guarantee written into the zoning code.

“We don’t want to simply develop away our industrial zones,” said council member Dan Garodnick, who chairs the committee on economic development. “Reviving the Mayor’s Office of the Industrial and Manufacturing Business is one way to do that.”

Garodnick said the administration wanted to show their commitment to the industrial sector. On Thursday, council members heard from experts and local organizations running the IBZs how the office, if reopened, could better help the businesses.

Where is the Job Growth?

The term “industrial” runs the gamut from warehousing to artisanal food manufacturing, and until recently there has been little distinction and little clue as to where the job growth lies.

Advocates for preserving industrial spaces and fostering the manufacturing sector are generally talking about attracting and keeping tech and light manufacturing businesses, not parking lots and concrete plants.

There has been plenty of recent discussion about how to better incorporate these jobs into various neighborhoods to build strong communities. San Francisco has piloted zones with ground floor industrial and upper level housing, and Planning Commissioner Carl Weisbrod has floated similar ideas.

Housing advocates have joined the conversation, noting that affordable housing is nothing without jobs to support it.

On Thursday, the Independent Budget Office released a study looking at the various subsectors of the the city’s industrial sector.

Aside from construction, the IBO study found, the industrial job wages are actually not much higher than retail. Furthermore, the low-barrier jobs that do not require a college degree pay only as much as retail or food service jobs.

Still, the industrial sector as a whole is more likely to hire people of any educational level whereas half of non-industrial jobs require a bachelor’s degree.

But because so many of these new jobs are tech-based, there is a widening skills gap and increasing need for education and economic development within communities, said Sean Campion of IBO.

Many council members of districts with IBZs called for stronger support of the city’s industrial sector in a rally before the hearing on Thursday.

“This office needs to be empowered by the deputy mayor, and have authority,” said deputy Brooklyn Borough President Diana Reyna. Reyna and other service providers brought up issues like business owners not having stability without long-term leases and operational issues. Advocates also pointed towards the non-profit run Brooklyn Navy Yard as being a good mission-driven model.

Carlos Menchaca, council member of Red Hook and Sunset Park, said the current implied understanding that IBZs would not be rezoned was not enough.

“We need to this on paper,” said Menchaca. “We want to have the right kind of infrastructure at a time where there is so much movement.

Council member Brad Lander, representing Gowanus, said many empty promises were made to the industrial sector by the previous administration and now was the time to turn it around. Lander, previously the director of the Pratt Center for Community Development, had asked the IBO to conduct its study on the city’s industrial sector.

Council member Antonio Reynoso noted that his mother worked at a cheesecake factory—now a luxury condo building—and was paid well, enough to raise her son on the wages.

Long Island City business owner Sandy Spaeth said she would now be in Connecticut if not for the help of the local business development organization, Long Island City Partnership, telling her it was possible to find a space in Woodside, Queens. Now they employ 60-100 people depending on the season, and most of her employees walk to work.

Benjamin Dulchin, executive director for the Association for Neighborhood and Housing Development, coordinated the rally and said he wanted to make sure the mayor saw he had community support for strengthening the industrial sector. ANHD and the Pratt Center released a report the same day outlining a vision to create 50,000 manufacturing and industrial jobs in the city in the next decade.

For too long, manufacturing and housing had been pitted against each other, Dulchin said, but it is now widely understood how jobs create an ecosystem in neighborhoods, creating a community.

“Those are hard choices, and there will be trade-offs made,” Dulchin said.