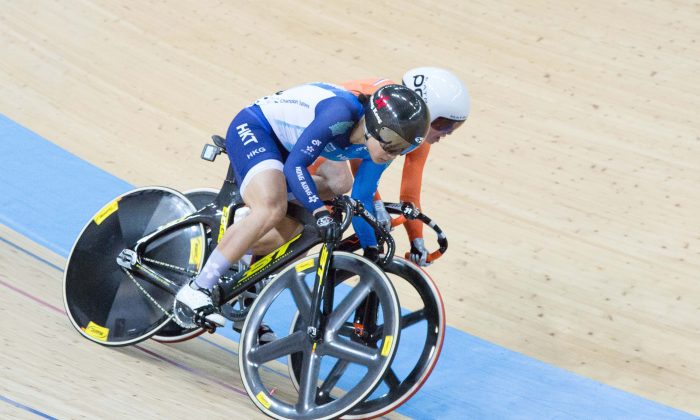 HONG KONG—Hong Kong played host to the UCI Track Cycling World Championships from April 12-16 at the Tseung Kwan O Velodrome. It was only the second time the Championships had been hosted in Asia, and this was a great occasion for Hong Kong to showcase the best athletes in track cycling at the recently opened (2013) 3,000 seat 250 metre track Velodrome.

Over 300 top cyclists competed over the 5 days, from over 40 nations in 20 medal events, with local interest closely focusing on the performance of Hong Kong’s favorite Olympic athlete Sarah Lee Wai Sze, competing in three events, the Women’s Sprint, 500 metre Time Trial and Keirin. Sarah won gold in the 500 metre Time Trial in 2013 at the World Championships in Belarus and was hoping to win again in-front of the home crowd in Hong Kong.

It was a disappointing Championships for Sarah, in that she didn’t win a gold, but still encouraging and uplifting for Hong Kong to see we have a top-class international athlete who can compete across multiple events with the very best. She was 4th in the 500 metre Time Trial, 10th in the Keirin, after falling in her heat, but won bronze in the Sprint. She remains an inspiration for Hong Kong cyclists, and is encouraging the next generation coming through the ranks, namely Vivian Ma Wing Yu. Sarah turns 30 next month, but with the right coaching and training, she can remain competitive well into her 30’s.

The Championships were dominated by Australia, who won 11 medals overall, 3 Gold, 5 Silver and 3 Bronze, evenly divided between their Men’s team (5) and Women (6); the next nearest nations in medal tally were France, Belgium, Great Britain and New Zealand with 5 medals; and then Russia, the USA and the Netherlands with 4.

Although the medal placings were dominated by Europe and Australasia, Asia still made the podium, with Sarah Lee, and Mohd Azizulhasni Awang (Malaysia) who won gold in the Men’s Keirin.

Some athletes won multiple medals, but it is tough to dominate in more than one event.

For the most part the teams, post Rio, were starting to rebuild after the Olympics. None more so than Great Britain, who competed without Bradley Wiggins (retired), Mark Cavendish (ill), and Jason Kenny and Laura Trott, (10 Olympic medals between the two of them) who are expecting their first baby in August and contemplating their future in cycling.

Nonetheless, the Championships was still a great opportunity for Hong Kong to see world class athletes compete for elite status within their sport. So, it comes as a huge surprise to read in other media, that the event leaves Hong Kong Cycling with deficit of HK$3m.

These events invariably take longer, cost more and require more resources than originally expected. HKRU hosts the Rugby Sevens, Cycling has a role-model of best practice for how an event can become a ‘golden goose’. It can be done, but takes time. Hong Kong has experience and expertise to make these events work, and hopefully Apeldoorn does too, as hosts in 2018.