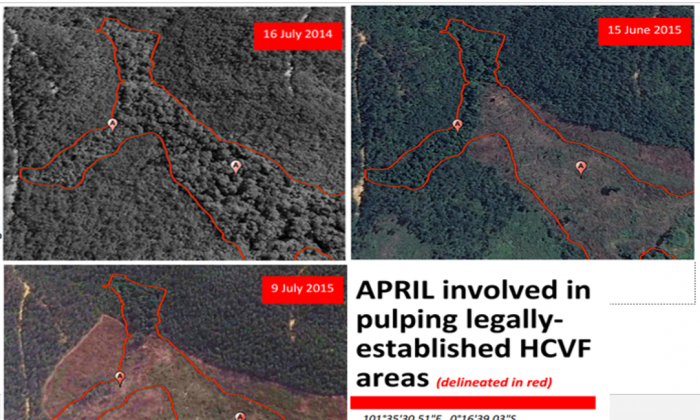 The main subsidiary of one of Indonesia’s second-largest pulp and paper company is involved in illegal forest clearing in Riau province, an epicenter of the country’s ongoing fire crisis, according to a new report by Greenomics Indonesia, an NGO.

Greenomics used satellite imagery and RAPP’s operating documents to identify the company’s the clearing of legally established high conservation value forest areas, shown to have started between July 2014 and June 2015 and to have continued through the following July.

“It is not difficult to see how the credibility of APRIL’s new sustainability policy will be undermined if the company is involved in the illegal logging of legally-established HCVF areas,” the report says.

APRIL, which says it is working hard to change its ways after years of being one of the biggest corporate drivers of forest destruction, expressed “serious concern” about Greenomics’ findings in a statement on Tuesday and promised to discuss the matter in a meeting of its Stakeholder Advisory Committee on November 10-12.

In the meantime, the company said it would commission a third-party audit and submit a preliminary report to the Environment and Forestry Ministry.

“We reaffirm our commitment to the Sustainable Forest Management Policy 2.0 and specifically to the protection and management of our HCV areas,” the statement says.

“We consider Greenomics as an important stakeholder, value their inputs, and would be open to further engagement with them as we strive to progress with our sustainability initiatives.”

This article was published by Philip Jacobson, a contributing writer for news.mongabay.com. This article has been republished with permission, original article here.