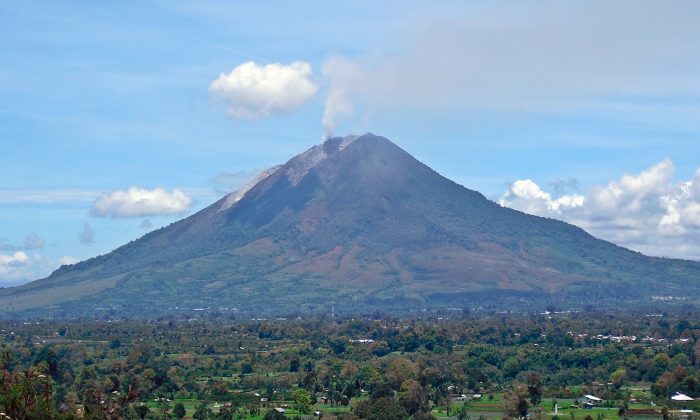 Video of the eruption was posted on Twitter by Aisyah Llewellyn, a freelance journalist in Indonesia. Some have mistaken the volcano in her footage for Mount Agung in Bali, which lies 1,400 miles east and is suspected to imminently erupt, prompting over 81,000 to evacuate.

VIDEO: Driving at full tilt away from Sinabung. That was way more intense than I intended. pic.twitter.com/gIFBWcx2X7

Mount Sinabung is one of the 34 active volcanoes on the island of Sumatra. It has erupted multiple times in recent years, killing 16 in 2014 and 6 in 2016.

Tens of thousands live in the volcano’s vicinity and refugee camps are established no less than 4.3 miles from the volcano, Llewellyn said.

The closest refugee camp to Sinabung (in background). 7 km away from the mountain which erupted again this morning. pic.twitter.com/oa9ULFpfrK

Just like Mount Agung, Mount Sinabung lies on the Ring of Fire, a belt around the Pacific Ocean containing 75 percent of the Earth’s active volcanoes.

Mount Agung, however, causes greater worry. The last time it erupted in 1963, nearly 2,000 people were killed.

Volcanic activity has now ratcheted up over the last month or so, building to hundreds of tremors on Sept. 24. Volcanologists already raised the threat level to 4—the highest possible level—on Sept. 22.

An eruption is highly likely say volcanologists, but not certain.

Authorities established a 5.5 to 7.5 mile evacuation zone around the volcano. Over 81,000 have been displaced as of Tuesday evening, the Indonesian Red Cross reported.

The government stated it has established refugee camps and is providing food, clothing, toilet facilities, masks, and cash.

Several nations have posted travel advisories over the weekend and on Monday, Sept. 25, including the UK, New Zealand, Australia, and Singapore.

“Given the possible eruption of Mount Agung, Singaporeans should defer non-essential travel to the affected areas at this juncture,” the foreign ministry said in an online statement.

Early on Sept. 24, a 650-foot-tall column of smoke was seen rising from the mountain, according to the chief geologist monitoring the site, Gede Suantika.

“We observed sulphuric smoke spewing from its crater and we never saw this before,” Suantika told Reuters.

“There are some who are staying behind because the volcano hasn’t erupted yet or because of religious beliefs,” said Indonesian National Board for Disaster Management spokesman Sutopo Purwo Nugroho at a news conference.

Nugroho said Mount Agung has entered a “critical phase,” with hundreds of shallow volcanic tremors indicating that magma has risen closer to the surface.