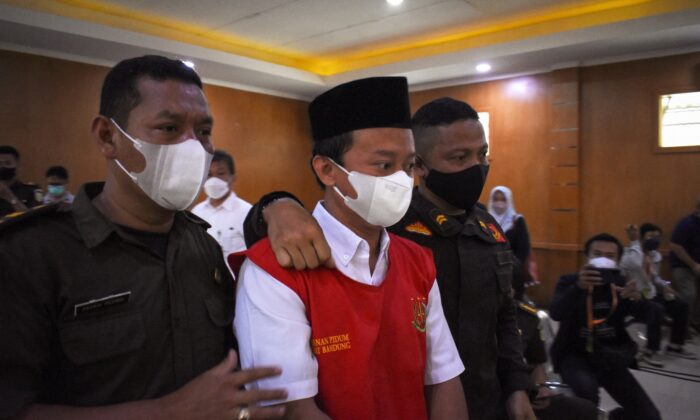 Indonesian teacher Herry Wirawan (C) is escorted prior to his trial at a court in Bandung, West Java on Feb. 15, 2022. (Timur Matahari/AFP via Getty Images)
Asia & Pacific

An Indonesian boarding school principal was sentenced to life in prison on Tuesday for raping 13 of his underage students and impregnating eight of them, which resulted in the birth of at least nine children.

The court found Herry Wirawan, 36, guilty of raping 13 students aged between 11 to 14 on various occasions from 2016 to 2021 at the Islamic boarding school in West Java’s Bandung City and in hotel rooms or rented apartments.

“The defendant deliberately committed violence and obscene acts,” President Judge Yohannes Purnomo Suryo Ali said. “Instead of educating his students, he resorted to violence or threats of violence to force children to have sexual intercourse with him.”

Wirawan pleaded guilty and apologized to his victims and their families during the trial. He also pleaded with the court for a lenient sentence on the grounds that he is the sole provider of his wife and their three children, reported news outlet Coconut Jakarta.

According to reports, Wirawan founded the religious boarding school in 2016 and lured students from poor families with scholarships. Students were only allowed to return home once a year for a holiday and were cut off from any communication, with their phones confiscated.

West Java police began investigating the case last May and arrested Wirawan after one of his victims returned home and informed her parents that she had just given birth.  His case was first made public last November when court proceedings commenced.

Prosecutors had sought the court to sentence Wirawan to death and chemical castration—which is a punishment for child rapists under a regulation signed by Indonesian President Joko Widodo in 2020—citing the severity of his offenses.

The judges denied the request for chemical castration, saying that the Criminal Code stipulates that people sentenced to death or life imprisonment may not be subject to other punishments other than the revocation of some rights.

The court also ordered Wirawan to pay 331 million rupiahs (US$23,000) in combined compensation requested by the victims and between US$600 and US$6,000 for medical and psychological treatment for each victim.