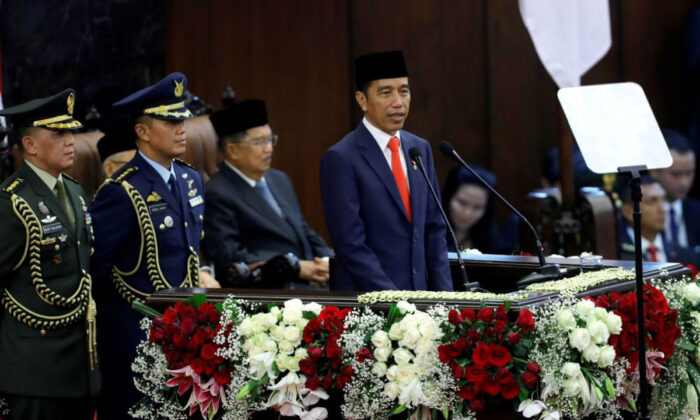 Indonesian President Joko Widodo delivers a speech after taking his oath during his presidential inauguration for the second term, at the House of Representatives building in Jakarta, Indonesia, on Oct. 20, 2019. (Adi Weda/Pool via Reuters)
Asia & Pacific

Indonesia’s new capital city will be named “Nusantara,” which translates as “archipelago,” with Parliament’s approval of a bill to relocate the capital from Jakarta to a remote site on Borneo island, a senior government official said on Tuesday.

Indonesia’s House of Representatives approved a bill on Tuesday to relocate the country’s capital to a remote region of Kalimantan, where the government already owns approximately 180,000 hectares of land.

“The new capital has a central function and is a symbol of the identity of the nation, as well as a new center of economic gravity,” National Development Planning Minister Suharso Monoarfa told Parliament after the bill was passed into law.

President Joko Widodo has confirmed that the new capital will be named “Nusantara,” as it is “iconic internationally” and describes the archipelago nation, Monoarfa said on Monday, Channel News Asia reported.

According to Monoarfa, Widodo chose the name “Nusantara” from among 80 names submitted to him, which was also reviewed by linguists and historians, though it remains unclear whether the new capital will be a province or a city.

Widodo first announced the relocation of the capital city to Borneo in 2019, citing the fact that Jakarta, with a population of 10 million people, is prone to flooding, gridlock, and earthquakes. The project was then delayed due to the pandemic.

The president claimed that the cost of moving the administrative center would cost under $33 billion, of which the state would fund 19 percent, with the rest coming from public-private partnerships and private investment. The cost includes new government offices and homes for about 1.5 million civil servants.

The site of the new capital, 2,000 kilometers (1,250 miles) northeast of Jakarta, is one of the regions least prone to the natural disasters that regularly hit the archipelago of 17,000 islands.

There are also economic and political reasons for relocating the capital from Jakarta, which, according to Widodo, is home to 54 percent of Indonesia’s 260 million population and generates 58 percent of the country’s gross domestic product.

But environmentalists fear the move will hasten the destruction of forests that are home to orangutans, sun bears, and long-nosed monkeys, as well as increasing pollution that is already on the rise as a result of coal mining and palm oil production.

“The move will have an environmental impact,” Greenpeace senior forest campaigner Jasmine Puteri said. “Jakarta has suffered so many failures from pollution, water crisis, and flooding. We don’t want these problems in the new capital.”