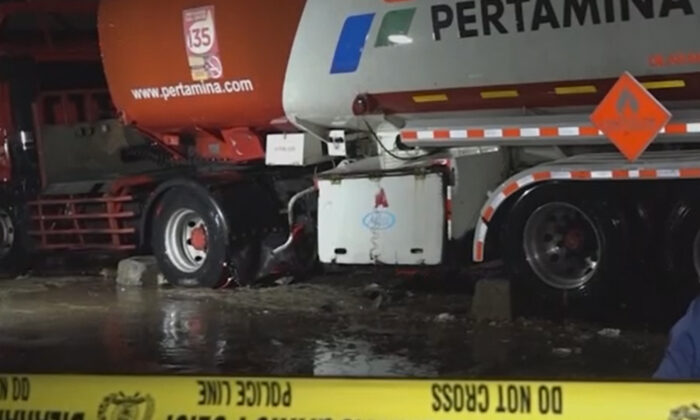 This still from video shows an oil tanker truck that smashed into cars and motorbikes in Cibubur, East Jakarta, Indonesia, on July 18, 2022. (AP/ Screenshot via The Epoch Times)
Asia & Pacific

JAKARTA, Indonesia—An oil tanker truck smashed into cars and motorbikes near Indonesia’s capital on Monday after its brakes apparently malfunctioned, killing at least 11 people and leaving others injured, police said.

The tanker truck, operated by Pertamina, Indonesia’s state-owned enterprise and energy company, was speeding out of control when it hit two cars and 10 motorbikes that were stopped at red light in Cibubur neighborhood in eastern Jakarta, said Latif Usman, the Jakarta police director of traffic.

He said authorities were still investigating the cause of the accident, but a preliminary investigation showed the brakes malfunctioned while the truck was going downhill and approached the intersection traffic light, hitting and running over several motorists.

At least 11 people died instantly and six others were hospitalized with injuries, some in critical condition, Usman said. There was no explosion reported from the crash.

Police were questioning the truck driver, who suffered light injuries.

Pertamina said it was taking efforts to extend treatment to the victims and working closely with the authorities in investigating the cause of the accident.

“We express our apologies and deep condolences to the victims and their families,” said Eko Kristiawan, Pertamina’s manager in West Java.