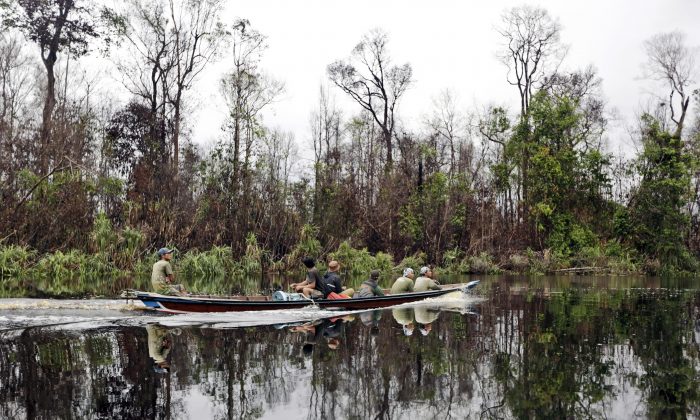 A boat sails on a river at a peat land forest recently burned in a wildfire in Sungai Mangkutub, Central Kalimantan, Indonesia, on Jan 8, 2016. (AP Photo/Dita Alangkara)
International

JAKARTA, Indonesia (AP)—Indonesia has strengthened its moratorium on converting peat swamps to plantations in a move a conservation research group says will help prevent annual fires and substantially cut the country’s carbon emissions if properly implemented.

President Joko “Jokowi” Widodo’s amendment to the moratorium regulation, which was issued on Monday, expands it to cover peatlands of any depth and orders companies to restore areas they’ve degraded.

Indonesia’s move was welcomed by Norway, which in 2010 pledged $1 billion to help the country stop cutting down its prized tropical forests but has released little of it. As a result of the expanded regulation, Norway said it would give $25 million to Indonesia to fund restoration of drained peatlands and another $25 million once an enforcement and monitoring plan is ready.

Draining of peat swamps by palm oil and pulp wood companies is a big contributor to destruction of tropical forests in Indonesia and the country’s greenhouse gas emissions. The land conversion worsens annual dry season fires that release huge amounts of carbon stored in the peat. Many of the fires are deliberately set to clear land of its natural vegetation.

Indonesia has made major commitments to reduce greenhouse gas emissions and protect its tropical forests, which are home to critically endangered species, but deforestation has continued largely unabated. A study in the journal Nature Climate Change estimated that by 2012, Indonesia was clearing 840,000 hectares (2 million acres) of forests a year, more than any other country.

Arief Wijaya, a forests expert at the World Resources Institute, said Tuesday that the strengthened moratorium is particularly important for protecting Indonesia’s Papua region as the “last frontier of natural forests” still largely untouched by exploitation.

The institute estimates Indonesia could achieve a 7.8 gigaton reduction in carbon emissions over 15 years, which is equivalent to about one year of U.S. greenhouse gas emissions.

Wijaya said that in practice the amended regulation means companies such as Asia Pulp & Paper, one of the world’s largest paper producers, are prohibited from expanding their use of peatlands, even if they are within their concessions. They also must rehabilitate drained peatlands and peatlands damaged by fires.

Last month, the company was criticized by Indonesia’s Peatland Restoration Agency which released photos showing one of its suppliers in South Sumatra was replanting peatlands which burned in last year’s dry season fires and were supposed to be restored.

The fires from July to October last year in southern Sumatra and Kalimantan were the worst since 1997, sent a life-threatening haze across Indonesia into Singapore, Malaysia and southern Thailand. A study by scientists from Harvard and Colombia universities estimated that fine particulate matter in the haze hastened the deaths of 100,000 people.

Indonesia’s Environment and Forestry Ministry said in a statement that one of the main causes of last year’s fires was corporate mismanagement of peatlands, which in turn led to the beefed up regulations.