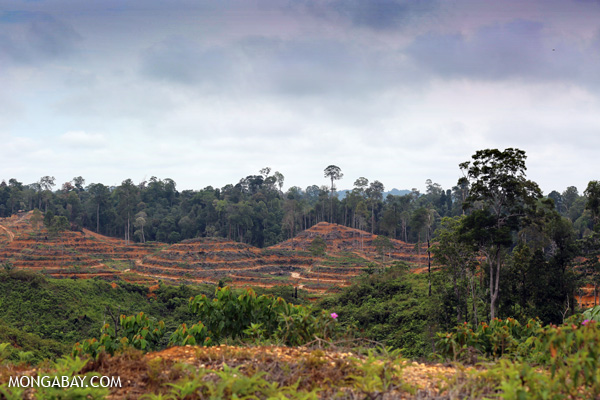 Indonesia Ministeries Unite to Save Forest?

Newly elected Indonesian president Joko “Jokowi” Widodo announced on October 26th that the Ministry of Forests and the Ministry of Environment would be combined and that Siti Nurbaya would become Forests and Environment Minister. The move was part of Jokowi’s appointment of 34 cabinet level positions, ranging from Foreign Minister to Religious Affairs Minister.

The move surprised many and will be watched closely as environmentalists, companies in the forestry sector, and public policy analysts say it presents both extreme challenges but also great opportunities for long sought-after reforms.

Nurbaya is a veteran government bureaucrat who entered politics last year, becoming a representative with the Nasdem Party. Few people who spoke with Mongabay.com about what the merger and Nurbaya’s appointment might mean for the forestry sector were very familiar with the new minister’s background or perspectives on environmental issues. But all recognized Jokowi’s change as a sign that significant upheaval within the forestry sector might be possible.

“She has no previous, notable history on environmental issues, so it will be interesting to see what her policies will be,” said Aditya Bayunanda of the World Wildlife Fund-Indonesia.

“There are challenges to align the two ministry interests but it provides an opportunity towards more sustainable policies across the sectors,” he added.

“Her experience in the Ministry of Home Affairs should equip her in the merging processes of Ministry of Forests and the Ministry of Environment,” said Daniel Murdiyarso, Principal Scientist at the Center for International Forestry Research (CIFOR). “Substance-wise she should have strong advisers.”

Murdiyarso’s confidence in Nurabaya’s experience is shared by some conservation organizations. They caution, however, that the wide array of issues the two ministries have been responsible for might make the path toward substantive reform a difficult road to hoe for the new minister.

“It’s inevitable that the burden of Siti Nurbaya’s leadership will be heavy considering the difficulties of the merger of her two ministries and of the complexity of environmental issues and natural resource management, especially in Indonesia’s forestry sector,” said Teguh Surya, Forest Political Campaigner at Greenpeace Indonesia.

“As someone experienced in the world of bureaucracy, however, this should not be insurmountable for [her] as long as she can open up space for active public participation in the process of formulating environmental and forestry policy,” Surya added.

In combining the two ministries, redundant positions will be streamlined into one, a process the President instructed Nurbaya to complete within two months. But the big question, say conservationists, remains what impact the merger will have on the issuance and oversight of permitting and environmental protections.

Bayunanda says a more powerful ministry with a main purpose geared for environmental protection might help to bring in line all the disparate ways the country’s forests are denuded.

One of the Ministry of Environment’s primary tasks has been to evaluate whether or not companies are complying with environmental impact assessments, a task the ministry has been lax in undertaking, say conservation groups.

“The problem had been the Ministry of Environment has always been one of the smallest in size in terms of staff and budget,” said Bayunanda. “Joining the ministries could provide the capacity and resource to implement that mandate more effectively. There should also be better consideration for issuance of concessions, more room to push conservation agenda and stronger law enforcement.”

“In many cases in the past, like with the outbreak of forest fires, the two ministries had two different opinions about how to address problems,” said Aidil Fitri, a campaigner with the Palembang-based conservation group Wahana Bumi Hijau. “So combining the ministries might make it much easier to take legal action.”

Among the reforms conservationists have outlined are developing better strategies for integrating forest protections into the nation’s commitment to reducing its greenhouse gas emissions. Groups like Greenpeace are also calling for improved mapping and defining of concession boundaries, a leading source of land-tenure conflicts in Indonesia. In order to better deescalate those conflicts, Greenpeace says, the new ministry should establish protocols for bringing stakeholders together to resolve disputes, which up to now has often not occurred or has given greater consideration to permit holders, overshadowing the rights of forest communities.

In a move that pleased conservationists, Nurabaya announced this week a temporary halt to the issuance of forest-use permits. But, they say, the minister must do more. Increasing the amount of forest areas included under the Forest Moratorium and extending the moratorium are high on their list, as well as taking steps to achieve zero deforestation.

“[The temporary halt in issuing permits] needs to be reinforced by license reviews, especially those in which there are suspicions forest protection policies have been violated,” said Surya. “But of course this week’s announcement is not sufficient if the president’s forest moratorium is not strengthened and extended after May 2015.”

CIFOR’s Murdiyarso said the combined ministry might take a different approach to the permitting process generally. “They can be more selective and heavy handed,” he said.

While the merger consolidates some of Indonesia’s sprawling bureaucracy that regulates the forestry sector, there remains concern that it might not do enough to eliminate overlapping jurisdictions.

“The next question is how to handle the variety of environmental issues which arise in other extractive industries,” said Surya. “Who has the authority over those matters, will they be directly handled by president? Unfortunately, the public has yet to get a clear answer on this.”

This article was originally written and published by Robert S. Eshelman, a Special Reporting Initiative Fellow for news.mongabay.com. For the original article and more information, please click HERE.