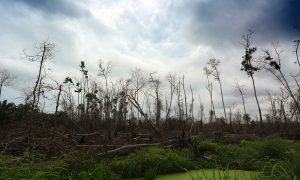 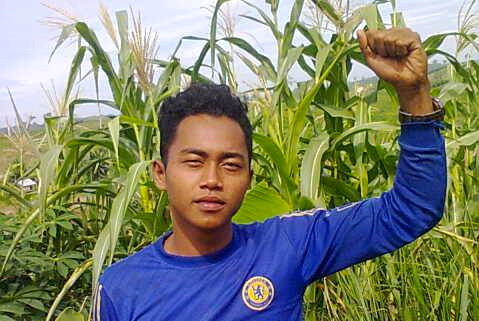 Indra Pelani, 22, was killed on February 22, 2015 by security guards working at a post in a concession owned by WKS. Photo: Walhi
Environment

Asia Pulp & Paper’s supplier Wirakarya Sakti Sakti (WKS) will end its relationship with a security contractor implicated in the killing of a villager in Jambi, says the Indonesian forestry giant.

In a statement issued Monday, APP said it has halted operations in and around the “conflict area” where Indra Pelani, a 22 year-old from Lubuk Mandarsah village, was killed by security guards employed by PT MCP, a firm contracted by WKS to secure an acacia plantation. Indra had been en-route to a rice harvest festival with a friend when the incident occurred.

“APP and WKS took the decision to delay operational activities in the field, including planting, harvesting and log transportation, around the conflict area in Lubuk Mandarsah,” said APP. “This decision was taken to respect local sensitivities at this difficult time, and allow APP and WKS to prioritize the provision of appropriate support to the community and family of the victim.”

“This delay period will be evaluated weekly in consultation with relevant stakeholders.”

The pulp and paper company added that MCP had violated its contract with WKS, which is now “in the process of disengaging” with the security company.

The February 27th incident has spurred an outpouring of criticism from environmental and civil society groups, which say APP needs to do more to resolve disputes with communities. The WKS plantation has been particularly problematic — communities assert that the concession was granted in areas used for agriculture.

Indonesian NGO Walhi has been working for about a year to mediate the conflict as part of APP’s zero deforestation policy, which aims to address social and environmental concerns that have long plagued its operations.

The incident is still being investigated, but APP has strongly condemned violence and pledged its assistance to support law enforcement in the case. The seven guards implicated in killing have turned themselves over to authorities.

Violence by security forces is not uncommon in Indonesia, especially in and around plantation and mining concessions. Security is frequently outsourced to local firms, which sometimes lack sufficient training and protocols for dealing with conflict situations. Rights groups say that police often do a poor job investigating and prosecuting guards who commit crimes.

APP’s zero deforestation policy was established in February 2013. A recent audit of its implementation to-date found “moderate” progress, noting that the company had stopped clearing forests for plantations but was still challenged by conflicts with local communities. Indra’s death is now being used by critics to hammer that point home.

Still, APP remains one of a small handful of Indonesian companies that has formally committed to eliminating deforestation and resolving conflicts. APP’s biggest competitor, APRIL, continues to clear forests and face regular protests from local communities.

Many of the conflicts in Indonesia stem from the government’s approach to granting land for concessions. Historically the central government has often ignored local land use, especially in cases where that land use preserved forest cover. As a consequence, agencies like the Ministry of Agriculture and former Ministry of Forestry have granted these area to companies for outright conversion to plantations, mines, and industrial agriculture, displacing traditional users. There are signs that the system may change however, with a new push to map land claims and set up disputes resolution processes.