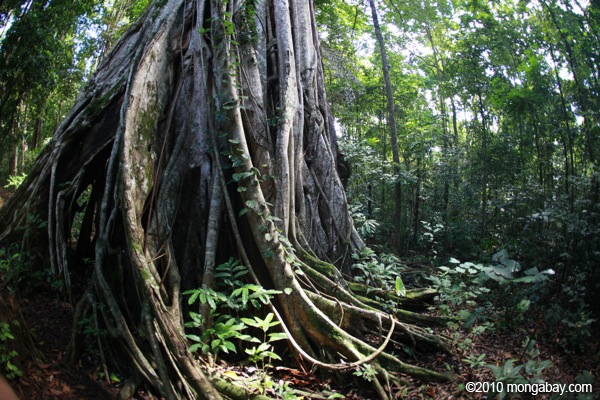 Strangler fig in Sulawesi. Photos by Rhett A. Butler.
Environment

The world’s first cabinet-level ministry dedicated to implementing REDD+ has been dissolved. In accordance with Indonesian Presidential Decree No. 16/2015 the agency known as BP REDD+, along with the National Council on Climate Change, has been absorbed into the newly merged Ministry of the Environment and Forestry (MoEF) as part of a massive government restructuring.

Former leaders of BP REDD+ may be kept on as advisors to the new Directorate General of Climate Change Oversight—one of nine Directorates General established during the restructuring and merging of the Ministry of Environment and Ministry of Forestry. The move is part of a push by newly elected President Joko Widodo to streamline the government and reduce overlap of agencies.

However, the dissolution of BP REDD+ is seen by its former head, Heru Prasetyo, as a major set back for government accountability in Indonesia. While operating as a cabinet-level ministry answerable directly to the president, BP REDD+ served as a critical check on the notoriously inefficient and sometimes corrupt government ministries. Now, as part of that same system, unless there is real and meaningful reform within the MoEF, Prasetyo fears REDD+ programs will become ineffectual.

Further, Prasetyo warns that operating under the MoEF will severely limit Indonesia’s REDD+ scope which also affect areas outside of the forestry sector.

“If forest areas only covers 40 percent, REDD+ agency deals with the-untouched 60 percent,” Prasetyo said, indicating that under the auspices of the MoEF, there will be little power to engage with the agriculture sector or local governments, for example.

Other government officials, including Pungky Widiaryanto, of the State Ministry of National Development Planning, believe that the merger is a positive step. Specifically, Widiaryanto believes that a toxic combination of resentment toward BP REDD+’s sudden ad-hoc existence, and lack of clear regulatory authority made it unable to achieve the ends for which it was established.

“BP REDD+ had only little recognition from other government agencies, causing REDD+ to progress slowly in Indonesia,” Widiaryanto wrote in the Jakarta Post. He believes that with proper public supervision, the newly formed Directorate General of Climate Change Oversight can leverage the strength of the MoEF—one of the more powerful agencies in the country—to exact real reform.

In the meantime, some uncertainty remains surrounding agreements made between the former BP REDD+ and local governments. During its single year of existence, the agency signed MoUs with at least eight provinces including Aceh and South Sumatera. Although some local officials and NGO’s have re-iterated their commitment to those projects, Prasetyo is concerned that the MoUs will become invalid with the dissolution of the agency, allowing local governments to back out of those agreements.

All predictions or concerns about the future aside, however, Prasetyo and his former deputy of operations, William Sabandar have also stated that the dissolution of BP REDD+ is in direct violation of Indonesia’s $1 billion agreement with Norway.

“What’s certain,” Sabandar told the Jakarta Globe, “is that the presidential decree violates the agreement between the Indonesian government with the Norwegian government which is stated in the Letter of Intent in 2010.”

That LoI states, in part, that Indonesia should, “establish a special agency reporting directly to the President to coordinate the efforts pertaining to the development and implementation of REDD+.”

In response to this, the Ambassador of Norway, Stig Traavik, told the Jakarta Globe he was cautiously confident that progress could still be made.

“Indonesia and Norway are allies in protecting forests, sustainable livelihood, and clean air. So, we will listen to Indonesia’s government plans because this is Indonesia’s forests,” said Traavik. “We are open minded [to the situation] and will listen to what they want to do next.”

This article was written by Loren Bell, a correspondent writer for news.mongabay.com. This article has been republished with permission, original article here.