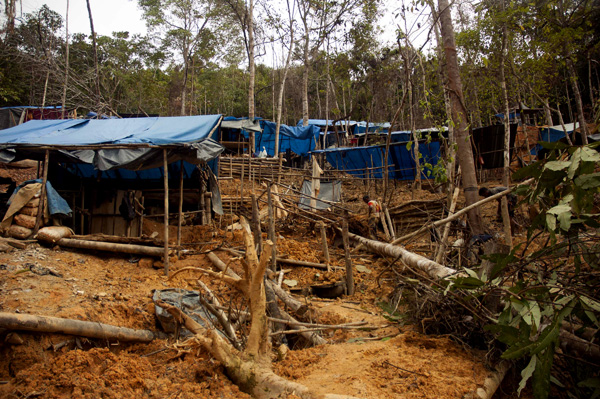 By Loren Bell, news.mongabay.com
Share
FacebookFlipboardTweetRedditEmail
MOREPRINTFONT BFONT S
The Governor of Aceh Province, Indonesia appears unwilling to implement a mining moratorium, despite repeated statements he intends to do so. Governor Zaini Abdullah, a co-founder of the separatist Free Aceh Movement (GAM), has said on several occasions that he believes there should be a moratorium on mining licenses, however watch-groups claim no official policy has been enacted.

The Director of Friends of the Earth, Indonesia (Walhi), Muhammad Nur said that by February 2014, the number of mining permits issued in Aceh had reached 136, covering 780,409 hectares (1.9 million acres).

“According to the information we have received,” he said, “the government is still issuing permits to mining companies.”

Last week, the Governor again reiterated the need for a moratorium after it was learned that thousands of fish had been poisoned by pollution from mining activities in Pidie and Aceh Jaya Regencies.

“A mining moratorium is a commitment by the Aceh Government to maintain the balance and sustainability of the environment,” the Governor said in response to the revelations. However, according to Walhi, no official policy followed the rhetoric.

The Aceh Anti Corruption Movement (GeRAK) confirms Walhi’s claims, stating that the government of Aceh has been reluctant to evaluate mining operations suspected of being problematic.

“From what we see,” said Hayatudin, the GeRAK Aceh Division Head, “the Governor only issues statements, but does not dare to actually audit problematic companies.”

Walhi also says that the Governor’s proposed plan to evaluate current mining operations has yet to be carried out, and many companies are operating in violation of their permits. Of the 136 permits issued in Aceh, Walhi claims 66 are located in protected forests including the high-conservation value Leuser Ecosystem (KEL).

Further, Muhammad Nur said, “the companies that have permits [from the local government] to mine in protected areas do not have permission from the Ministry of Forestry.”

Indonesia suffers from a lack of consistency concerning local and federal land regulations. The situation is exacerbated in Aceh following the 2005 peace agreement reached between GAM and the Indonesian government which gave Aceh substantial control over the regulation of its natural resources.

Despite the accusations by Walhi and GeRAK, the head of the Aceh government’s PR department, Murthalamuddin, maintains that under the current administration, not a single new mining permit has been issued. He repeated that the Governor’s commitment to preserving Aceh’s environment, and claimed that an evaluation of all existing permits is underway. Any company that is not active, or is in violation of the rules will have its permit revoked, he said.

Murthalamuddin also said that Aceh is particularly worried about the small community-owned gold mining operations. These companies are often run by people that don’t understand the negative impacts of traditional mining practices, which typically involve the use of mercury and cyanide. He said that the Governor has appealed to locals mining without a permit to stop their activities immediately.

This article was originally written and published by Loren Bell, an Indonesia- Mongabay correspondent for news.mongabay.com. For the original article and more information, please click HERE.