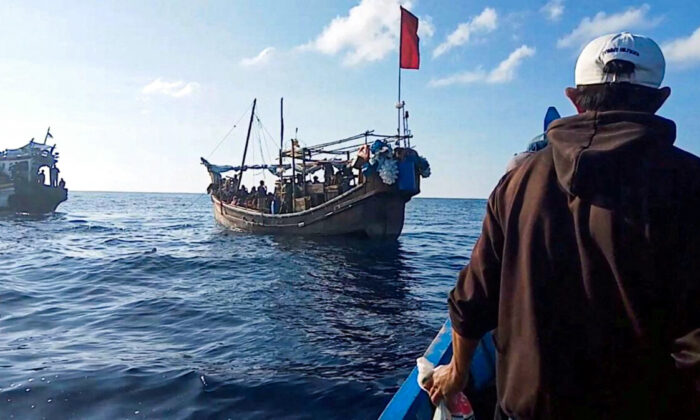 Indonesia Allows Rohingya Boat of Refugees to Dock, Amid Pressure From Rights Groups

The Indonesian government has allowed a stranded boat carrying 120 Rohingya refugees near Aceh province to dock, the authorities said on Wednesday, relenting under pressure from rights groups.

The boat was first sighted in waters off the coast of Bireuen on Dec. 26. The boat was leaking and damaged, with dozens of Rohingya refugees onboard, including women and children, the United Nations High Commissioner for Refugees (UNHCR) said in a statement.

Indonesian authorities on Tuesday had said they would turn away the vessel, and would only help to repair the boat and provide humanitarian aid, such as food, medicine, and water for the refugees.

“The Rohingya are not Indonesian citizens, we can’t just bring them in even as refugees. This is in line with government policy,” local navy official Dian Suryansyah said.

The Rohingya refugees came from Burma, also known as Myanmar, who have been denied citizenship since a Burmese citizenship law was enacted in 1982. Many have attempted to flee to Malaysia, Thailand, and Indonesia due to a military crackdown in Burma.

UNHCR urged the Indonesian government to urgently allow the Rohingya to disembark from the stranded boat, adding that the boat was floating in the open seas in the middle of harsh weather and could be at risk of capsizing.

“UNHCR is deeply concerned for the safety and lives of those onboard. To prevent needless loss of life, we strongly urge the Indonesian government to allow safe disembarkation immediately,” the U.N. agency stated.

The authorities subsequently relented and sent a navy ship to tow the boat from its location to shore on Thursday.

A total of 120 Rohingya refugees were moved from the boat to a temporary shelter on Friday. They will be required to undergo health checks and be tested for the coronavirus.

Armed Wijaya, chairman of the government’s Task Force for Handling Refugees from Overseas, said the boat was being allowed to come ashore on “humanitarian grounds.”

“This decision was made after considering the emergency situation experienced by the refugees on the ship,” Wijaya said.

A fisherman off the coast of Aceh province claimed the boat had spent 28 days at sea, with some pregnant women on board.