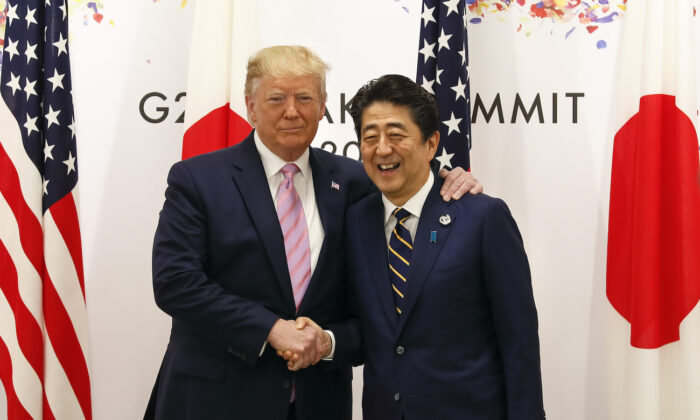 Then-U.S. President Donald Trump with then-Japanese Prime Minister Shinzo Abe at the start of talks at the venue of the G20 Summit in Osaka, Japan, on June 28, 2019. (Kimimasa Mayama/Pool/Getty Images)
Asia & Pacific

As global leaders continue to extend condolences to the family of former Japanese Prime Minister Shinzo Abe, who was assassinated on July 8 while delivering a speech on the campaign trail for his party, experts are remembering Abe for his efforts in spearheading the Indo-Pacific strategy that is to continue shaping the world long into the future.

Blinken described Abe as a staunch supporter of the United States-Japan alliance, according to NHK. He praised him for upholding a vision of a free and open Indo-Pacific, and cementing ties with the United States and other like-minded countries.

“In his time in office, Prime Minister Abe did more than anyone to elevate the relationship between the U.S. and Japan to new heights,” Blinken said.

Abe launched the Indo-Pacific strategy respectively in 2014 and 2016, which exerted direct impact on former U.S. President Trump’s declaration in Tokyo in November 2017 and a U.S. Department of Defense report on the strategy in September 2021, according to Wong, who is also a professor at Tamkang University’s Institute of International Affairs and Strategic Studies.

Taiwan strategist and associate research fellow at Taiwan’s Institute for National Defense and Security Research, Su Tzu-Yun, said that Abe designated the CCP as the ultimate threat to global peace while in office, despite debates between leftists and rightists. His vision was a China-countering Into-Pacific framework, which went unanswered during the Obama era, however.

It was during the Trump presidency that American and Japanese leaders reinvigorated the QUAD (Quadrilateral Security Dialogue), which has now become part of America’s strategic architecture.

“This highlights Abe’s vision on security issues, which has proven significantly effective in curbing the output of the CCP’s authoritarianism,” the researcher said.

Meanwhile, Abe’s peace legacy includes his advocacy to amend the Constitution of Japan, seeking normalization of the country’s military.

“His idea that peace needs to be guaranteed by armed forces has not been accepted until recently,” Su said, “though he proposed it nearly 15 years ago.”

The expert noted Abe’s aims of constitutional amendment and the enhancement of Japan’s military capabilities were based on his understanding that the CCP is unlikely to change its authoritarian system. That, in turn, will precisely create threats for Japan’s domestic and regional security.

While condolences flood to the late Japanese leader and his family, a large number of China’s internet users have attempted to deride and humiliate him on Chinese social media platforms WeChat and Weibo, citing accusations that the CCP used in its previous propaganda campaigns against the former prime minister and his fellow Japanese politicians.

Su attributed the cyberbullying to long-term indoctrination by the CCP.

“The CCP misinterprets defensive attitudes that all democracies take towards its authoritarian regime as ‘anti-China’,” he said. “[The party’s] always adding fuel to the flame of nationalism domestically is the biggest threat [to regional peace].”

Lin Cenxin and Yi Ru contributed to this report.